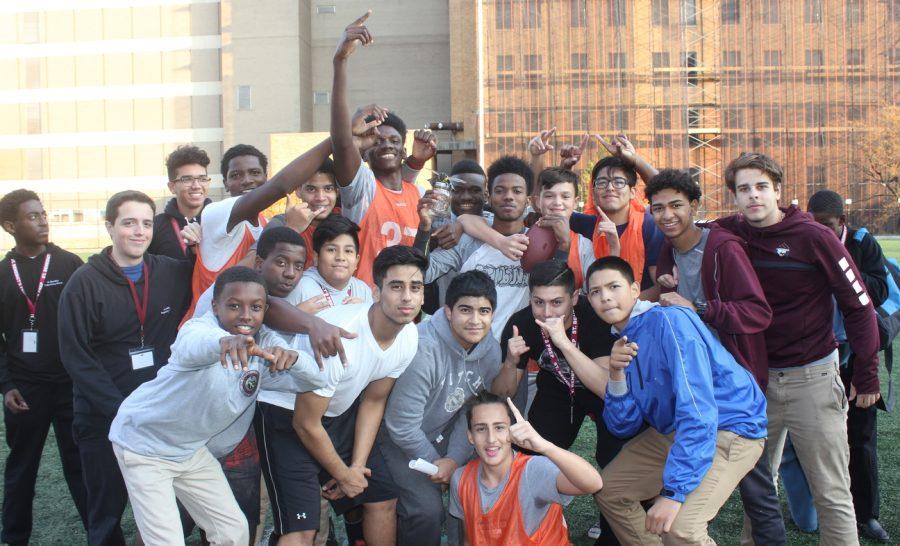 UDI quarterback Taj House faked a pass for the first play, which confused Father Celestine’s defense. Then Taj handed off the football to senior Sadie Beckles who ran on the play. Sadie only covered half the field, so the team found itself in first down. However, after three plays, members of Father Philip found themselves nearing Father Celestine’s end zone. During third down, UDII Carlos Acosta broke away from his defender and Taj threw a pass which reached Carlos for the touchdown.

Just before the game started, the Headmaster disqualified varsity athletes from both teams – a precaution against preseason injuries, but a blow to Father Celestine’s starting lineup. Despite this, Senior Myles Marotta remained optimistic. But Father Philip’s defence blocked Myles’ passes. Sadie disrupted many of Myles’ pass attempts, making it hard for Father Celestine to advance down the field.

To prevent a turnover, Myles took matters into his own hands, by running the ball whenever an opportunity presented itself. Myles’ rushes got Father Celestine its first and only touchdown.

On Father Philip’s second ball possession, Sadie drove into Father Celestine’s end zone making the score 14-7. And, scoring for Father Philip did not stop there because after causing a turnover on downs, Taj found eighth grader Tahjamell Bullock in the endzone for another touchdown.

“I take pride in being the group leader of this year’s 2016 Group Games champions,” he said. “I have been here for four years, and this is the first time we captured a group game championship, so it means a lot to us.”

The game’s most valuable player Sadie revealed the key factor to his group’s successful season.

“After the first two games, I saw how unorganized the others team were,” Sadie said. “To be different, I created a playbook which we used to demolish our competition in an organized fashion.”

“Whether it is Fall Term, Winter Term, Summer Phase, or Spring Phase, our talent is going to be visible.”