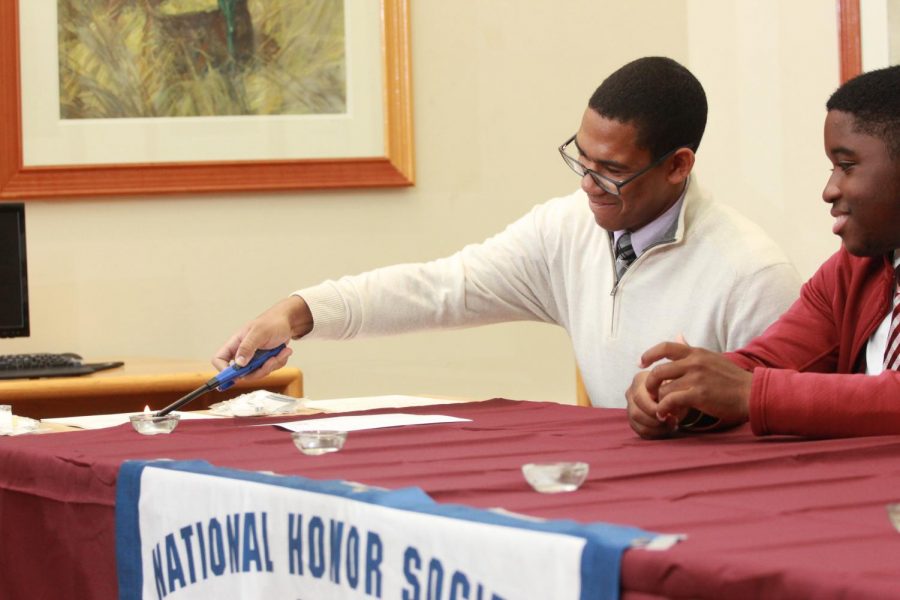 You receive your first evaluation and spot some less-than-stellar grades. You know you can do better.

Have no fear because the National Honor Society is here!
It’s that time of the year again when students who exemplify the pillars of leadership, scholarship, service, character and as of this year, the fifth pillar — citizenship — have taken up the responsibility to be the academic leaders for their classmates. On October 11th, 2018, thirteen new students were inducted as members of the National Honor Society.
The NHS has always been an important part of the school and has been moderated by Assistant Headmaster Michelle Tuorto and Dean of the Middle Division James Duffy since they resurrected the organization back in the mid-2000s. The current NHS contingent of inductees will be key for future leadership, Ms. Tuorto said.

Members of a new chapter for SBP, The National Junior Honor Society, can take their lead from more senior members of the NHS. In addition, the eight younger students will serve as as the academic leaders for the Middle Division and upcoming seventh graders. Ms. Sandra Nelson will serve as moderator of the NJHS. She said she is excited to witness how this experience will build character and aid students in developing leadership skills as they prepare for high school.

One NHS inductee, Ibrahim Stradford UD2, was inducted this year because of his drive to assist others in academic pursuits. “It’s just up from here,” Ibrahim said.
This year’s induction ceremony also left many with a deeper understanding of one of the NHS’s main themes or “pillars” — character.
Religion Teacher Grace Lenahan focused on the importance of character in her keynote speech.

“Character helps build all the other four pillars,” Mrs. Lenahan said. “You need good character to help other students, to pursue academic excellence, and to be a good citizen, and to maintain an attitude of a leader.” Mrs. Lenahan has always been a stalwart supporter of the NHS and believes it offers a great learning opportunity for students. “The biggest room in the world is the room for improvement,” Mrs. Lenahan added.