A New Monk for St. Benedict’s 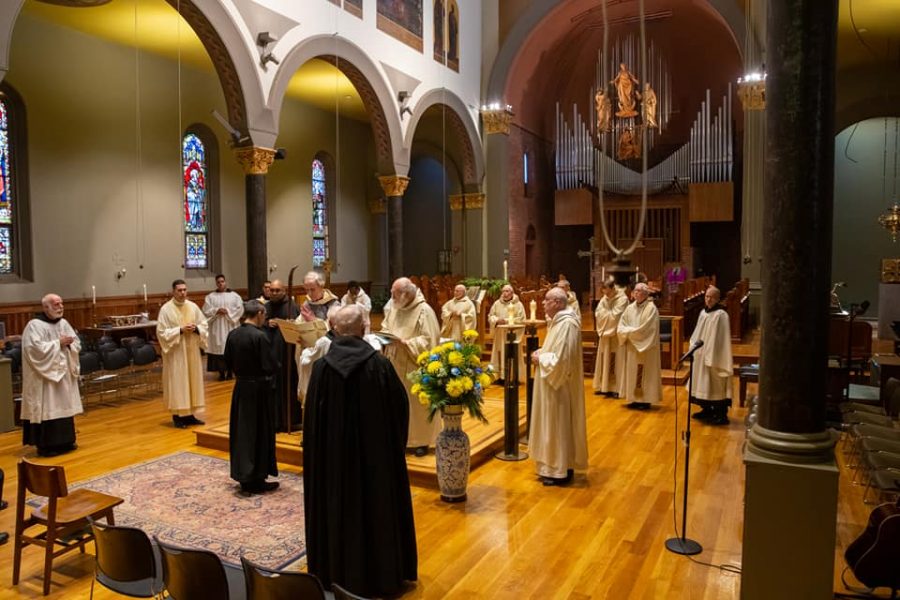 St. Mary's R.C. Church on Newark Abbey grounds was the scene of a special Mass over the weekend featuring "The Rite of Temporary Monastic Profession."

Suscipe me, Domine, secundum eloquium tuum, et vivam et non confundas me ab expectatione mea.
(“Sustain me O Lord, as you have promised, that I may live; and disappoint me not in my hope.”)

A young, slender man stood before the altar dressed in a simple black cassock, a thick, leather belt encircling his hips. He raised his arms before him, his palms uplifted, and prepared to sing. Dozens had assembled in St. Mary’s Roman Catholic Church in Newark, N.J., this Saturday morning for the occasion. But there was no roar in the gallery. Only silence.  We held our breath.

Br. Mark Martin Dilone, O.S.B., pierced the quiet with his rich baritone voice, singing a hymn in Latin. He filled the vaulted space around him with its sacred syllables. “Suscipe me, Domine,” he began.

It’s been a while since I’ve translated Latin, but I could discern from his intonation and the circumstance that Br. Mark’s song was aired in supplication. He was humbly, earnestly asking someone to provide something. I gleaned from the Mass program that he was singing an ancient Gregorian chant known as the “Suscipe,” a newly professed monk’s traditional prayer for God’s help.

Standing in this simple, but historic brick church built on monastery grounds, I knew we were witnessing the rarest of modern sights in the secular West – a young man vowing to do what it takes to become a Catholic monk.

It is an event that the Benedictine monks of Newark Abbey, as well as those interested in the continuing success of the monastery and adjoining St. Benedict’s Preparatory School, hope will occur with increasing frequency.

And the celebratory air for the event, timed to coincide with the Feast of the Immaculate Conception, was evident. Abbot Melvin Valvano, O.S.B. celebrated the Mass. St. Benedict’s faculty members, including Dr. Dennis Lansang and Ms. Patricia Flynn, played and sang the sacred music. Jordan Hall ’04 performed on violin. The monks not involved in celebrating the Mass wore a flowing, black, formal monastic robe known as the “cuculla,” replete with 73 pleats representing the number of chapters in their guidebook, “The Rule of Benedict. “

After Br. Mark completed the song-prayer, a chorus of support joined him, including two Benedictine nuns to my right, a few knowledgeable others scattered among the onlookers, and the entire community of Benedictine monks of Newark Abbey, who ringed Br. Mark from the altar. Celebrants blessed two garments — a black wool habit and black hood — and Br. Mark slipped them on, assuming the full uniform of his order.

For a few moments, we were out of time and space, in communion with Benedictines over the centuries chanting these very notes, professing these vows. The unfolding spectacle provoked in me a range of emotions. At first, I was afraid for Br. Mark as he stood there, looking so alone and vulnerable before the altar, surrendering to the weight of his promise and, perhaps, battling doubts. But, as he lifted his strong voice in sublime song, I sensed he was creating what could best be described to be, in the words of J.S. Bach, “an agreeable harmony for the honor of God.”  I felt peace and a connection with everyone there, as the community – lay and religious — joined him, pledging, by singing the Latin text, to stand with him, as he will stand with them.

As a practicing Catholic, I am fortunate to serve as a lay member of the faculty of St. Benedict’s Prep. The school is connected, physically and metaphorically, to the monastery. And the monks of Newark Abbey, despite their exotic but decidedly cool black, hooded habits, are no strangers to me, our students, or any member of the community. Most notable is our black-hood-wearing headmaster, Fr. Edwin Leahy, O.S.B., a national figure in education due mainly to his prolonged successes and partly to his gift for public speaking which has made him a frequently sought, highly animated and quotable interview subject for programs such as “60 Minutes.”

Benedictine monks, of course, founded the school in 1868. Many of its signature practices, such as the Group system and Backpacking Project, owe their existence to the mind of a monk. But their spiritual, academic, and practical contributions are far more than historic. With their many advanced degrees, Benedictine monks form a key nexus of the school’s religion department. They teach and counsel students, and perform many other duties.  They form the school’s spiritual and moral backbone.

It’s easy to understand how Br. Mark is going to need God’s help in living up to his “simple vows” of stability, conversion of life, and obedience.  In his “Rite of Temporary Monastic Profession,” Br. Mark promised that, for the next three years, his life will be rooted at Newark Abbey. He also vowed to practice humility, frugality, and celibacy, and to submit to the judgments of his superior. Once he has completed that circuit, Br. Mark, if permitted by his Abbot, will take his “solemn vows,” committing to these precepts for life.

Through his present actions, Br. Mark is moving beyond his one-year term as a novice as a vowed monk. He is one of 16. Two other young monks, Br. Asiel Rodriguez, O.S.B, and Br. Simon Peter Clayton, O.S.B., are a step ahead of him, preparing for their final vows in March 2020. Those will bind them to the monastery for life. As evidence of the monastery’s interest in enlarging its flock,  Br. Asiel has taken on the role of public relations and social media manager, brilliantly beaming everyday images of monastery life into cyberspace. It is there he believes the monastery can best get its message across to modern men.

I feel lucky to have witnessed Saturday’s Mass. Br. Mark’s actions seem impossible, improbable. A miracle. This is an era, after all, where conspicuous consumption is the norm, where modest, tasteful approaches to human sexuality seem nonexistent, and where ephemeral notions such as being in-the-moment often take precedence over stability and commitment.

How remarkable that this New York City-born man in our midst, one who is bright, thoughtful, hardworking, and kind, is taking on the monastic life of action and contemplation. At a reception held afterward in his honor, Br. Mark glowed with happiness. He praised the Abbot by saying, “he’s a wonderful father to us all,” and noted he looked forward to the coming days.

At the Abbey, he will draw upon others and look within for spiritual solace and will plan his public-oriented actions. A monastery, after all, is “at once a refuge and a very integral part of the world,” according to Fr. James Martin, S.J., the Jesuit priest and author.

I thank Br. Mark for being willing to sacrifice for others’ benefit.  I admire his strong spirit and character. I am still pondering the meaning of the Suscipe. What I know is this: Though formal, the words represent what a person might say before taking a leap of faith. “Sustain me O Lord, as you have promised that I may live,” the English translation says. “And disappoint me not in my hope.”