BEHIND THE PAGES: How did that photo happen? 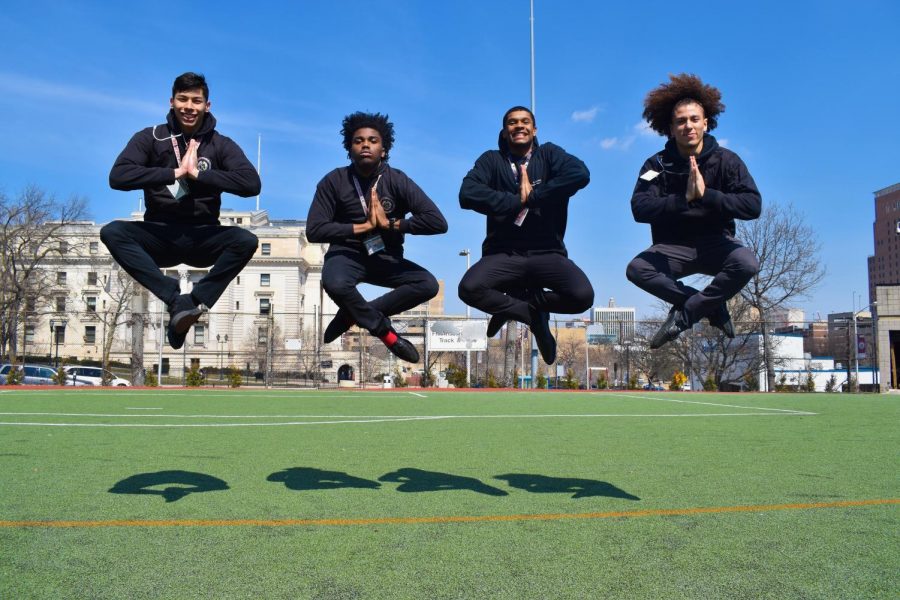 This is the first in a series of occasional posts that will detail life “behind the pages” at The Benedict News and give readers a sense of the activities that make life so interesting when creating, designing, and producing St. Benedict Preparatory School’s student newspaper.

We are receiving rave reviews from community members about the cover of the latest issue of the Spring 2019 double issue of The Benedict News. If you’ve seen the photo, you probably want to know more — how did this happen? Is it real or is it photo shopped? (It’s real!) The photo (see below), taken on the Upper Field, wraps the front and back of the newsmagazine. It depicts 8 uniformed students from SBP’s Upper and Elementary divisions leaping in the air. We thought it would be fun to talk with Jacob Anthony Amaro, BN’s editor-in-chief, about how it all came about. Amaro’s comments have been lightly edited for brevity.

Benedict News:  How did you get this idea for the cover? Were there any rival ideas? How were the students selected?

Jacob: Before I began to shoot (the photos), I asked the UD guys to make any suggestions they thought would add to my ideas. That’s how the jump shot idea came about. It was a combination of all our “two cents.”

The cadre of ED students was selected by ED Dean Sr. Ann Marie Gass. She chose students who would be well-behaved with their “big brothers.” I chose the UD students along with fellow Editor-in-Chief Jules-Roland Gouton. We tried our best to select students we knew would be great with our younger brothers and sisters: Francis Jean-Paul, Isaiah Sanchez, Jalen Cabrera and Jack Napoli. Jack Napoli could not make the photo shoot, so Michael Melendez filled in for him. This turned out to be great, as Michael knew Isabella, one of the participants from the ED.

BN: What did you say to get the students to jump so high?

Jacob: The UD students are all in great shape, so it was easy for them, much to my surprise, to jump and move their arms simultaneously to pose. The ED students were motivated and inspired by their bigger brothers. Their bigger brothers gave them a preview, so that they would know what to do when it was their turn. When the ED students joined the UD students, I simply told them to jump as high as they could, on Michael Melendez’ count.

BN: What kind of a day was it? Were there other activities going on elsewhere on the field?

Jacob: The day was a serene one — a regular day for a monastery in the middle of the bustling city of Newark. We chose the perfect time to use the field. As we were beginning to shoot, some ED students were making their way to class from the Lower Field, where they had been playing. Other than that, we had the field to ourselves.

BN: What were you trying to express in this photo?

Jacob: Recently, there has been a lot of focus on the history of the Hive because of its 150th anniversary. Our spring double issue, following suit, emphasized the Hive’s history. I wanted the cover to read in a similar, but slightly different, fashion.

History is typically presented as the past, but history is really now. There cannot be any history without the now. And the “now” of the Hive is that it is a K-12 Prep School, with boys and girls in grades K to 8, a much different “now” than the “now” 150 years ago, when it was founded as an all-boys college. So, what is going on now is important to the Hive’s future. And the cover portrays students from the UD and ED interacting with each other, springing toward the future together.

BN: Can you please give us the technical details? What kind of camera is this, how did you shoot it?

Cover Photo Metadata: Shutter Speed – 1/800s | Aperture – F8 | ISO – 250 | Focal Length – 22 mm. With that focal length, I wasn’t too far away from the subjects of the photograph. I knelt down in front of them, made sure they were all in the frame and, when I was ready, told Michael to count down. I set the camera to continuous shooting, allowing it to shoot at 5fps, provided that I pressed down the shutter button. At the count of 3, they jumped and I held down the shutter. It took us a couple of tries before everyone was off the ground at the same time.