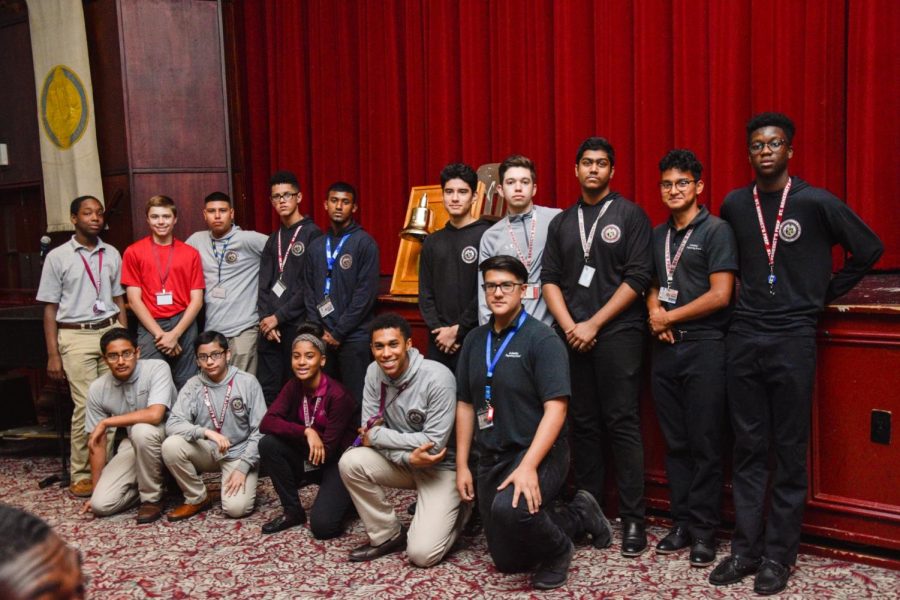 The Gray Bees who earned 4.0s pose in front of the infamous broken Coker Bell.

The National Honor Society today, beginning a new tradition, commended several students at SBP who made the Honor Roll List during Winter Phase.

“These students, although not perfect, chase the idea of being such,” began NHS Vice President of Tutoring Oliver DeLeon SY. “This ‘pursuit of perfection’ results in them catching excellence. These students are the academic torchbearers of the school.” Adding a plea for the Honor Roll students to continue to light “our way,” Oliver invited students from the NHS and the newly installed NJHS to call the names of those in their respective grade levels who made the Honor Roll. The list of names included 48 students from the Middle Division, 46 Freshmen, 97 Upper Division students and 35 seniors, a grand total of 226 SBP students — not to mention the 18 additional students from all Divisions who earned 4.0s.

After the students who earned 4.0s rung the Coker Bell, or tried to — it fell off after only three rings — the NHS invited three seniors to speak about their experiences of balancing academic activities with non academic ones — Varsity Basketball Captain Jake Betlow, Crew Captain Noah King, and 520 Corp. Manager Josh Nyaringo.

Fr. Ed trailed into the room after the ceremony, spotting the broken Coker Bell and asking if Andrew D’Arcy FY, who had broken it upon ringing it in the last ceremony, broke it.

Then everyone, following the traditions of Spring Phase, meandered about, eventually making their way to their respective projects, having been acknowledged for their hard work during the previous semester.