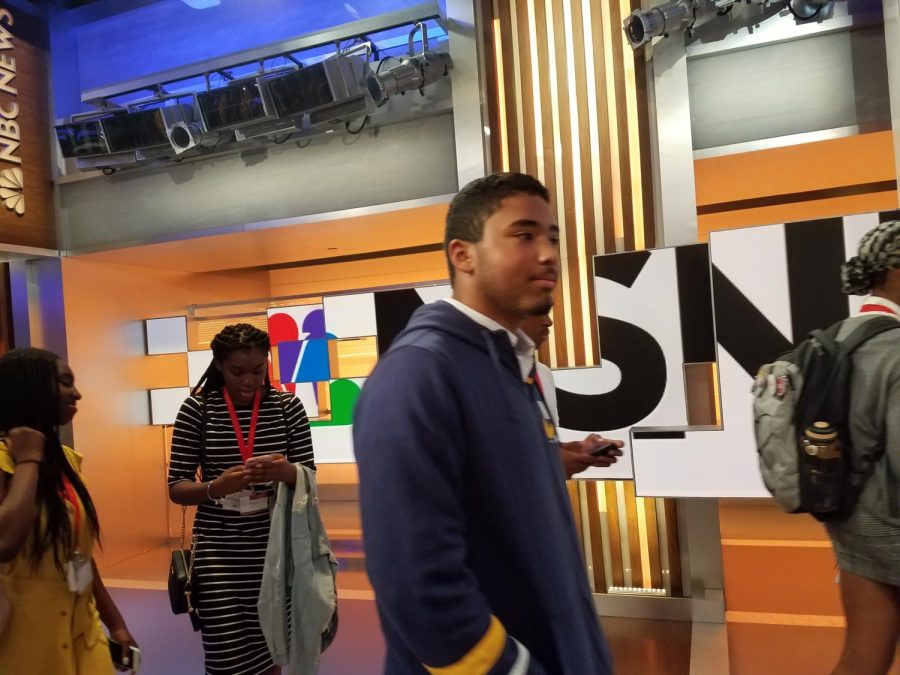 This summer I was fortunate enough to be accepted into a Rutgers University journalism program held in New Brunswick. At first, I was reluctant to apply because I didn’t want to have work to do throughout my short summer break. However, I applied and was accepted.

This year, the goal of the 10-day program (the Hugh N. Boyd Journalism Diversity Workshop for High School Students) was to produce an informational video dealing with health. I made the topic of my video Social Media and its effects on today’s youth. So I asked friends if they were interested and conducted interviews a few weeks prior to going to the program.

It took about an hour to get to New Brunswick and my anxiety started kicking in. My anxiety came from my fear that I didn’t prepare enough and that everyone else there had more experience. I was afraid that I was going to look like an idiot. But when I met everybody else in the program, I found that we were on a similar level, in terms of writing and technical expertise. My anxiety fizzled away.

There were about 16 teens in this program, including two other students from St. Benedict’s — Olatunji Adewole SY and Kolby Samuels UD1. We lived in the dorms that Rutgers University undergraduates inhabit during the school year. Throughout the days, we worked on multiple projects. We wrote profiles on other people in the program, and we composed articles about a guest speaker and the places we visited. Some of the sites included: the Asbury Park Press newspaper. In addition, we worked in groups to prepare presentations on health issues, including sleep deprivation and time management. For our final project, each of us created a video based on our own research and interviews. We alternated between all of this every day.

On the second day of the program, the Rutgers professors managing the workshop took us out to conduct person-on-the-street interviews for our group projects. In these interviews, reporters approach people at random and ask them questions tied to a news topic. This was a new experience and challenging. After all, if a person goes to the mall, he or she has an objective in mind and probably doesn’t want to be bothered by questions. And about half the time I was right. People often dodged us. However, some people were open to it, allowing us to have short conversations about sleep deprivation — our group’s topic.

On the third day of the program, we went into New York City for a day. We went to NBC studios where we had a meeting with executive producers about journalism and where it took them. We also toured Rockefeller Center, where the network is located. The lobby is very noisy but the floors above are quiet, especially because they were preparing for that night’s news show. For the next stop on our day, we visited the New York Times. There we were given insight on how news companies rush to get a story online or on paper first. If any one organization’s story is out first, they reason, more people will read their product. Around dinner time we ate dinner at ESPN where we met with one of the network’s sports writers. Soraya McDonald, its culture critic, described the opposite situation of what the New York Times had told us. Since ESPN isn’t always covering hard news, the reporter has more freedom to choose what she wanted to report on and more time to do so.

Nearing the end of the program on a Friday night, we participated in a Rutgers University panel discussion on teen health and were able to present the conclusions of our group projects. The panel also included mental health professionals who deal daily with the cases of teen suicide and teen stress. The panel was recorded by students at Rutgers and will be shown on the university’s website after Labor Day when the university’s school year kicks off.

On our last day, we finished our projects. The program organizers displayed all our work for parents and families. We also presented our videos to our visitors.  The ones that I saw before mine were great. They were very informational and well produced, especially considering that it was most students’ first time editing film.

My Mom was very proud of my accomplishments at the program. The Boyd workshop was a very good experience. I met so many talented people. And we shared so many experiences during its 10-day run. I totally recommend anyone trying to get into Journalism to do this program.