A Prayer for the Amazon 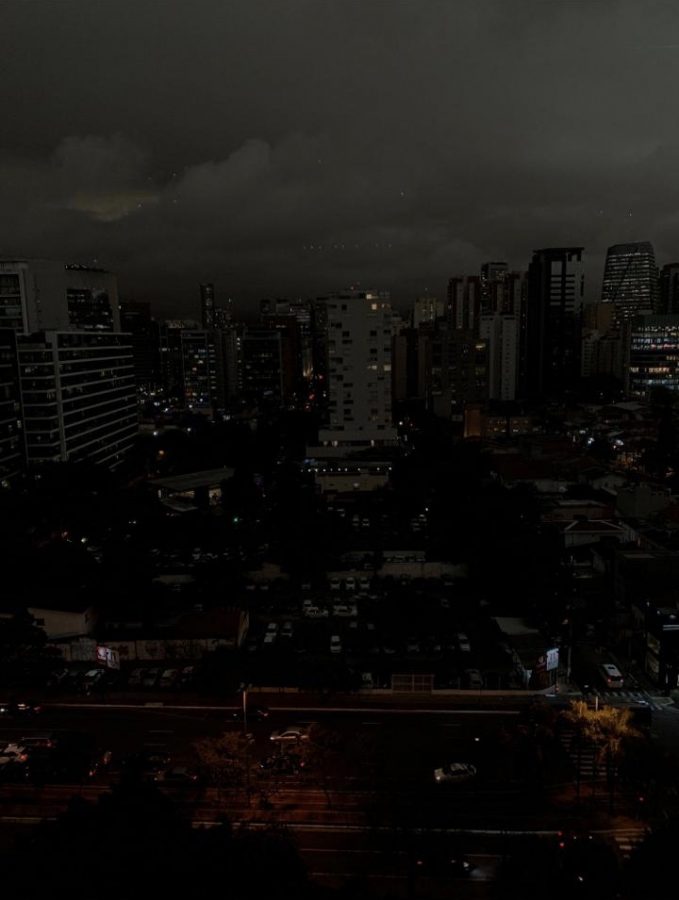 On Monday, Aug. 19 at 3 p.m. day turned to night in Sao Paulo, Brazil, as fires from the Amazon darkened its skies.

Imagine it’s 3 p.m. But the sky is darker than usual, as if it were night.

I do not live in the Amazon rainforest — I live in a different part of Brazil. But I have a fact that will amaze you and give you a sense of the proportion of the fire. I’m a citizen of Sao Paulo, a major city located about 2,750 kilometers (that’s 1,708 miles) away from the Amazon region. During the afternoon last Monday, Aug. 19, at 3 p.m., the smoke erupting from the runaway fires of the Amazon — despite the great distance — was able to reach the skies of the city of Sao Paulo. Impressive images have been taken and will surprise anyone.

My mother was frightened by the scene. “I was scared because I never saw anything like it in my life,” she said. “Even our dogs were scared. I thought it was a big fire.”

My father was driving on the main road of the city, Avenida Paulista, when shadows suddenly obscured the daylight. “When I looked into the dark sky, I was certainly scared because I was in the car and suddenly the sky in a matter of minutes darkened,” he said. “Black drops of water fell from the sky, something I have never seen in my life.”

The Amazon is burning. And my city, Sao Paulo, is covered in soot.

Most of the world may know this famous rainforest as the Amazon, but for me and my country, it’s known as Amazonia. But those facts are nothing when you consider that we are talking about one of the biggest environmental problems in history.

This problem does not belong only to Brazil and the countries that have lands linked to the Amazon. It’s a worldwide problem. There’s something great at risk here for all of humanity. Something that involves much more than a fire. It is the risk that humanity is threatening 20% of the world’s source of oxygen as its forests are being burned for days and days. There has been little action, and the fire has lasted more than three weeks.

According to a technical note prepared by the Amazon Environmental Research Institute (Ipam), the increase in the number of fires in the Amazon region is related to human action and the practice of “clearing” newly deforested areas and other types of land. The study indicates that deforestation is the likely factor responsible for this scenario, not drought, as Environment Minister Ricardo Salles asserted in his Twitter profile. “Dry weather, wind and heat have made fires soar across the country,” Salles incorrectly stated on the social network.

It is difficult to accept that humans are largely responsible for the fires that have taken place over the past week in the largest rainforest in the world. It’s unacceptable and requires action. Humans have placed their future at risk.

As a Brazilian, and a world citizen, I hope the world will be moved and will work to solve the problems as quickly as possible. But this will not be an easy mission. Talks between Brazil’s President Jair Bolsonaro and other countries’ leaders have been turbulent. Hours after leaders of some of the world’s wealthiest nations offered $22 million to help combat fires in the Amazon rainforest, Bolsonaro refused help. He started accusing countries like France of looking out for their own economic interests at Brazil’s expense, even suggesting they were falling back to colonial-era behavior of telling Brazil how to act. Reports are surfacing that he may change his position. But it is difficult to predict the outcome.

Brazil is very much its own country and its citizens do not need anyone dictating its course from the outside. But no country can manage alone, especially with a problem of this size.

I hope Bolsonaro in the coming days will accept the help, so together we can stop the destruction.

I pray for the Amazon, for the people who have suffered from the consequences and for the animals, who have lost their habitat, and many their lives.