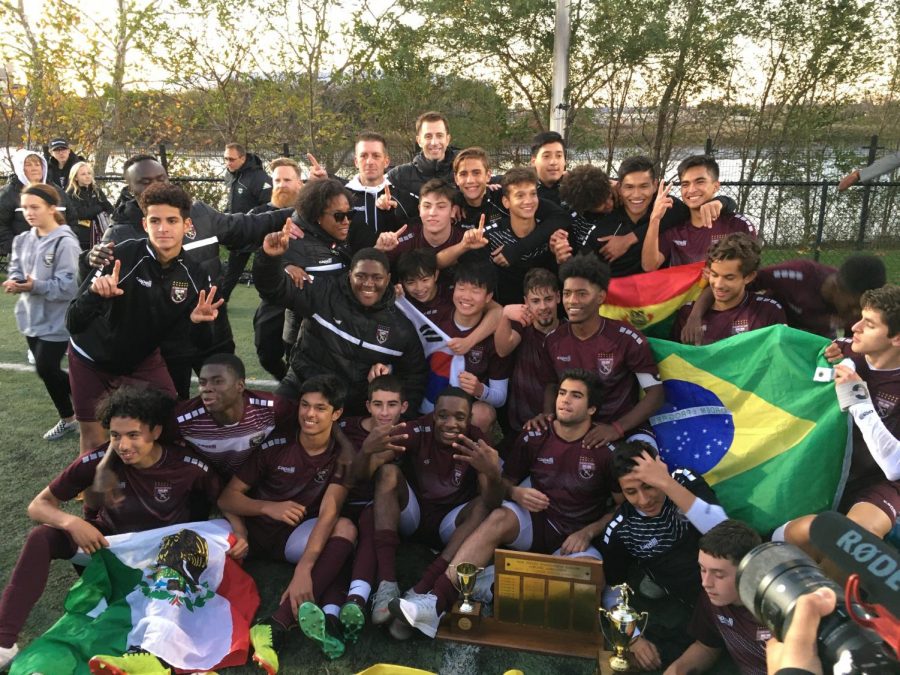 The SBP Varsity Soccer Team celebrates its final victory of its successful season.

In Friday’s game the Gray Bees went into the match ready to give everything they had. “If we need to break our legs on the field for our brothers and families to win this game we do it,” Team Captain Cao Chaves SY said.

The game kicked off with an early red card coming from Pennington’s number 8 after he elbowed Zemi Rodriquez UDII in front of the referee. After this the Gray Bees looked to attack but they could not find a clear half chance on goal, until Hyun-Jun Sun SY played an early ball on the ground into the box, finding Rhys Armstrong’s feet. He controlled the ball in one touch, and then struck it into the bottom left corner putting the Gray Bees with a lead of 1-0. The Gray Bees then went onto score another 2 goals one after another putting them 3-0 up going into half-time.

The team came out with the same fighting spirit in the second half and found another goal making it 4-0. “We knew anything was possible and they could still come back so we kept the same mentality and fought to the end,” Team Captain Lui Chaves said.

SBP players were in full control of the game until Pennington’s number 7 scored an excellent goal, pulling them back to 4-1. The goal from here for the Gray Bees was to find the game’s next goal and so they did when Jamar Ricketts put the game to bed by making it 5-1.

At the final moment, celebrations began for the SBP team. This year’s team was built by a bunch of new and younger faces and along the way team members faced  a lot of challenges. The team came up against a difficult schedule came out the end of it unbeaten. The goals team members made at the start of the season between themselves have been achieved.

The 13th National Championship will be confirmed when USA Today and TopDrawerSoccer release rankings.

“The rankings committee can put whatever number they want next to our name,” said SBP Soccer Coach Jim Wandling, whose team is seeking an unprecedented third straight national crown. “But until someone beats us, we’re confident that we are the top-ranked program in the country.”