Thursday – A Day in Jail 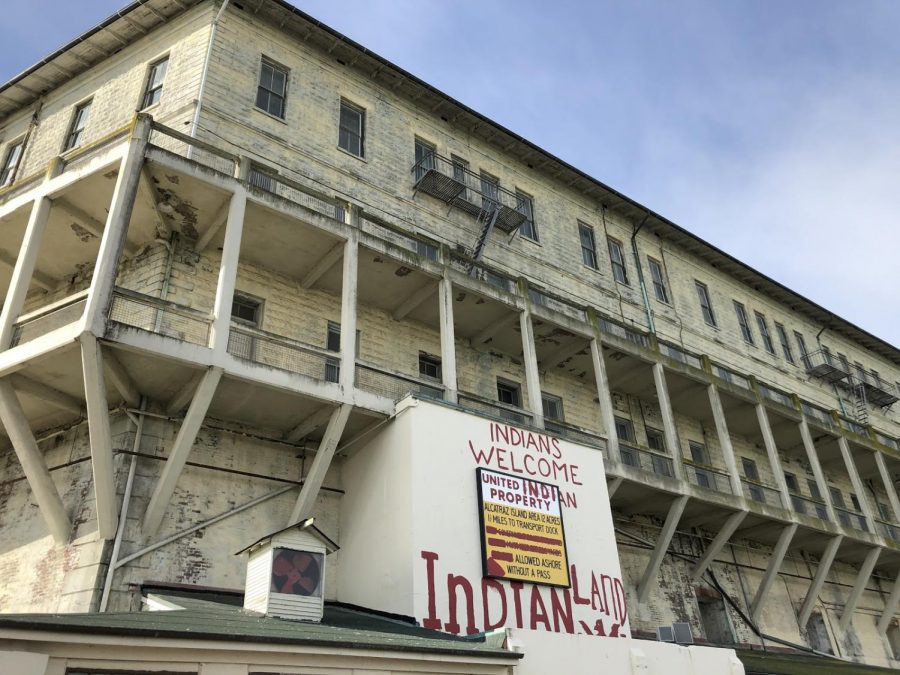 Woodside Priory School is not a jail, but Alcatraz was. Not everybody saw

Alcatraz as a prison; it was a home for some. We left at around nine o’clock after eating breakfast. The heart of San Francisco showed its history on its painted walls and local cultures. There was one instance where we had to block a lane to take quick pictures of the San Francisco Giants Stadium called Oracle Park.

Who knew that there are so many ports? The Alcatraz landing smelled like salt water, and the landing was decorated with large pots of succulents.

It does not take a long time to reach Alcatraz Island by way of ships. Right there, from not even half a mile away, the island looked stunning. The sunlight shown on the initial native side of the island is full of vegetation.

The island did not feel as horrid as history tells us, it was peaceful and quiet. It may be the landscape that brings beauty to this island, or else the island would look mossy, old and worn down, which it is. I learned a lot of history there, such as people who protested to reclaim native lands which were shut down after nine months. The island served as a lookout, then a prison. It was a home for a few families that found the island beautiful.

Children would take ferries to and from the island for school.

Remnants of the homes are now rubble piles on the side of the island that face San Francisco. Touring

the prison made the peaceful feeling turn abruptly to harsh stories of survival due to the audio tour. It brought vehement emotions to the tour. In the former home of America’s infamous criminals contained a cafeteria, three story cells around the building, a shower room, and courtyard where the inmates played baseball. The audio tour shared stories of only one successful escape, and several failed attempts that were also fatal. The cafeteria was prepared for hard times, with tear gas planted all along its ceiling and guards watching activity. The inmates mostly enjoyed baseball in the courtyard, which games could be heard from San Francisco shores.

The inmates in cell block A were the most tortured for having a small window that allows for a small glance at the thriving city with booming new styles and culture. One prisoner described it as if the walls were talking to you and knew the pain, as they squeezed in and pulsed in the minds of these prisoners. The hallways in the main prison were all named after famous streets in New York and Times Square.

After leaving Alcatraz, we all went to In-N-Out, and left for Lombard Street, known for its long winding roads and, not to mention, its steepness. Knowing this was the last day, we were eager to go back to the school to hang out with our Californian friends. Time flew into the night, and the group ended with prayer and a reflection about the entire trip: specifically, something that rocked, stuck with us, and will leave an impression on us. It was sad to see the night in the  valley for the last time, but nature thanked me for my stay with the most colorful sunset that anyone has ever seen, an all magenta purple show with the mountainous silhouette.