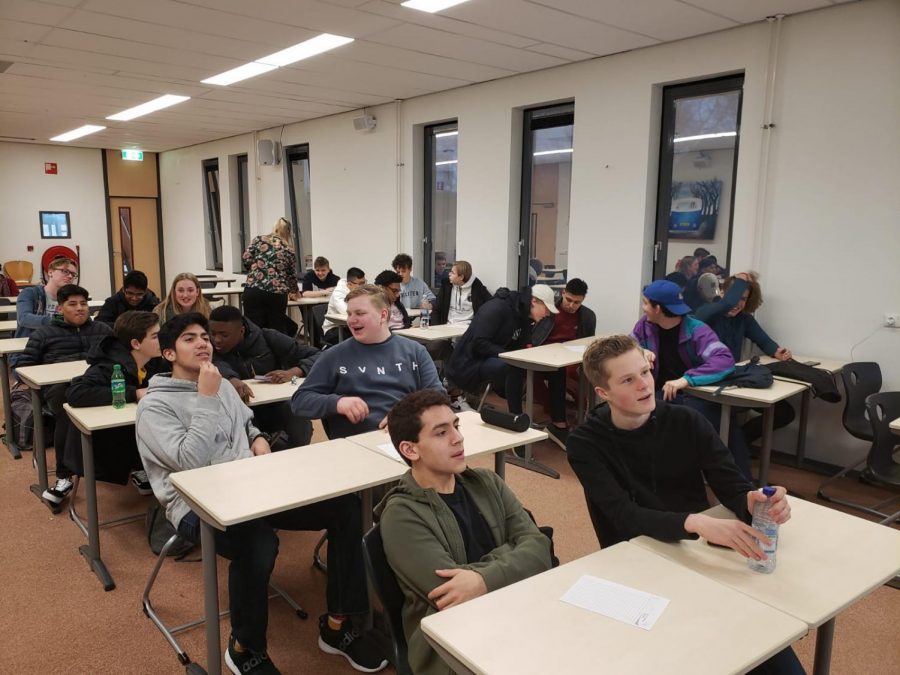 SBP students join their hosts in a Netherlands exchange program at the Jac. P. Thijsse School in Castricum, The Netherlands.

We started off our day today by going to our hosts’ classes.

These classes were very different from our American classes. The atmosphere was a lot more relaxed and the teachers seemed to really grasp the attention of their students. After a lesson in chemistry and English, we gave presentations to freshmen about life in the U.S. and about Benedict’s. I thought they went pretty well and the students were interested in life at the Hive.

We soon found ourselves on bikes riding around Castricum on a historic bike tour. It was awesome to stand in the same places where highly ranked German officers once stood, and my host introduced me to Netherland’s role in World War II.

After this, we faced our biggest task — cooking. My host and I decided to make hamburgers, so we went to the supermarket and bought all the vital ingredients for hamburgers: buns, meat, cheese, tomatoes, and lettuce. We arrived at the school’s kitchen only to find that all of the stoves were being used. We waited for a while but none of the stoves opened up. Finally we got a stove, but at the same time we were told we had 25 minutes left to cook.

We cooked the burgers – fast –  and prepared them and finished right before the time ran out. We brought our plate down to the dinner area where the smell of all other foods filled the air. We ate together and met many of the other hosts’ parents who attended the dinner. It was very interesting to talk to other parents and see just how different our cultures were. After the dinner I went back to my host’s house where we hung out until I went to bed. It was a great day.

This was a day full of learning.

We first started the day by going to class with our hosts; for me the first class was Visual Arts. In this class we learned about paintings and the various forms of art. We had an opportunity to create our own paintings. Many of the students created abstract art, or portraits of people.

After the Visual Arts class we headed to PE. In PE we played soccer, dodge ball, and basketball. This class was fun because we were able to talk with and learn about the other students at Jac. P. Thijsse.

After the PE class the students at St. Benedict’s gave a small presentation to the younger students at Jac. P. Thijsse. We taught them about The Trail, Convo, and The Overnight. When the lesson was over, we started a bike tour around Castricum to learn its history.  On this tour we were told about the soldiers who died in Castricum and the Netherlands during WWII. It was very interesting to hear the stories of people fighting for their freedom here in the Netherlands.

The day ended with a dinner that was prepared by all the students in the exchange program. All the students made dishes, some Dutch and some American. This was a good experience because we all learned something new. The parents of the students attended as well and it was a great bonding moment for all.