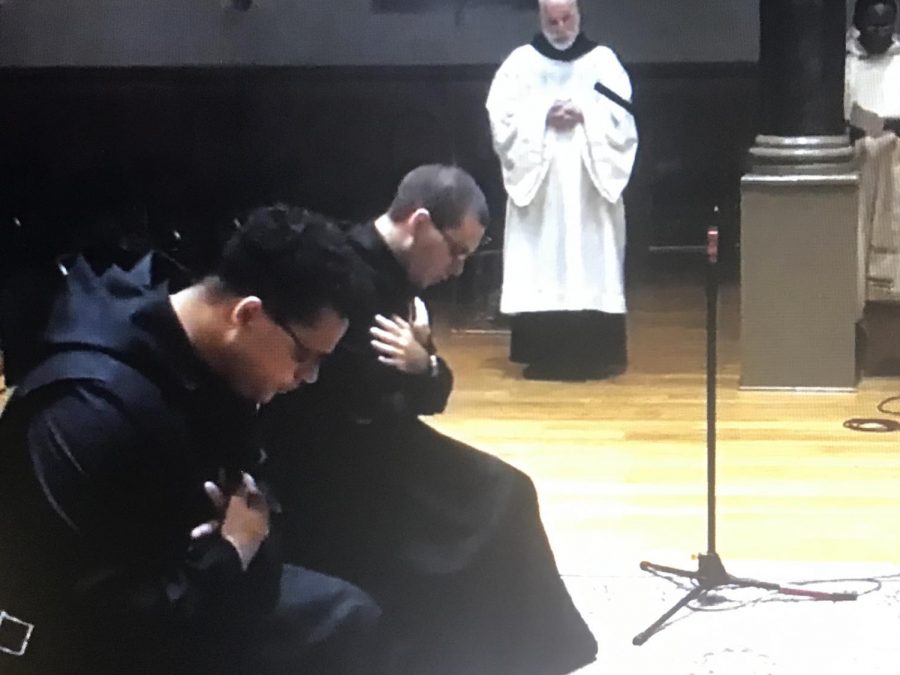 Heroes: Behind the Scenes at the Solemn Profession

We will undoubtedly hear about many heroes in the coming days, as medical workers and emergency workers work tirelessly to battle the coronavirus.

Yet, in a quiet corner of the world, in a church in Newark, N.J., we saw a different form of courage at play this morning. These Benedict’s men at St. Mary’s exhibited true courage and selflessness.

For months, the community of the monastery, Newark Abbey, and the monastery’s school, St. Benedict’s Preparatory School, had been excited about the prospect of celebrating the “solemn profession” by two young men pledging vows to the abbey for life. The ancient religious rite and the afterparty in the school cafeteria were planned for the most auspicious of days – March 21, the feast day of St. Benedict himself. 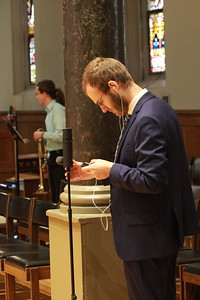 But coronavirus fears put a damper on the excitement. The party for Br. Simon Peter Clayton, O.S.B., and Br. Asiel Rodriguez, O.S.B., was cancelled. Then, the men learned that, due to escalating fears, only monastery members and no one else – not their extended families, not their friends, not their colleagues or their students — would be permitted to attend the religious ceremony.

There had to be a way, they thought, they hoped, to involve the community in the service, even if remotely.

The Abbey’s Benedictine volunteers, newly minted college grads who are working at SBP this year, teaching and performing other duties, came to the rescue. They live at the monastery so they knew they would be present.

Volunteer James Mello, who teaches American Immigrant History and serves as assistant adviser to the Benedict News, offered his services to film the event and livestream it on YouTube. The fact that he had never done either before didn’t faze him. 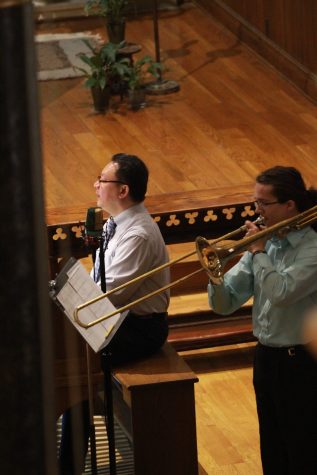 Through a Google Meet last Thursday, he conferred with the homebound students, Benedict News Editor-in-Chief Kevin Calle, Design Editor Anthony Mosquera, and Staff Photographer Justis Worrell. He learned from them on-the-fly how to operate a nifty two-in-one video camera device called a Mevo the Benedict News had borrowed from the Advancement Office for the event. They also showed him how to livestream the service on the Benedict News’ YouTube channel.

“The students did such a good job explaining everything that I felt perfectly equipped to pull it off,” Mello said. As of 8:30 p.m. tonight, the YouTube video Mello filmed of the religious ceremony had 476 viewers.

Volunteer Kevin Lamb, who teaches Game Theory, played the trombone at the service, accompanying Benedict’s beloved chemistry teacher Dr. Dennis Lansang, who served as organist and cantor.  “Kevin sight-read and learned the music only an hour or so before the service and played beautifully,” Dr. Lansang said. “He added such harmony to the sound.” 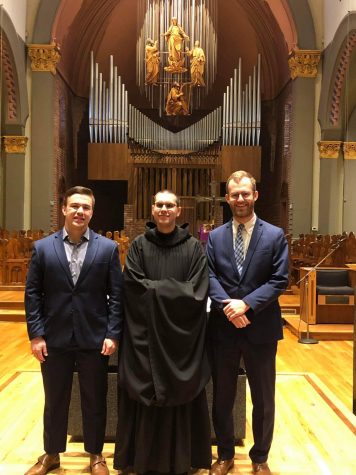 The biggest heroes of the day surely are Brs. Simon and Asiel, who bravely committed their lives to God through the ancient ceremony. But here’s a special nod to Dr. Lansang, Mr. Mello, Mr. Lamb, Mr. Barsody, and the monks of Newark Abbey, who wanted everything to be as special as possible for the young monks and made it happen.