Toward a Land of the Free 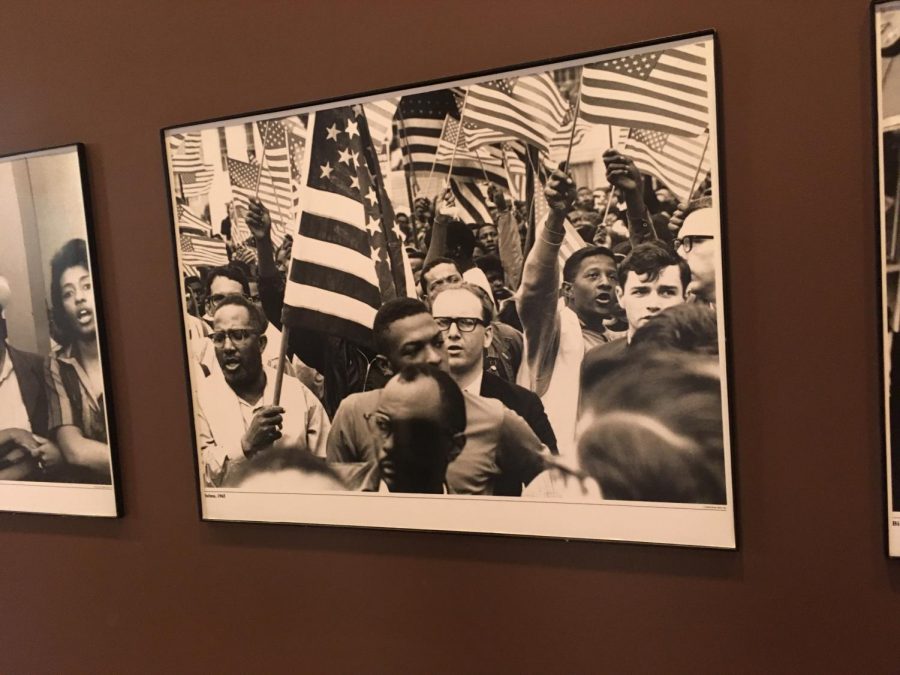 The writer took this photo of an exhibit at the Birmingham Civil Rights Institute in Birmingham, Alabama, while on a school trip marking milestones of the civil rights movement.

¨Where are you from? Montclair, Little Silver, Long Branch? You’re so well mannered!¨

A teacher at a prestigious nearly all-white high school in New Jersey, asked me; I was a student for a day.

¨No, I’m from Newark,¨ I said, trembling, embarrassed.

¨Aww man, did we check you for weapons and shit before you came in?¨

The all-white class erupted in laughter.

The teacher  said this jokingly to cover up his sincerity. I did not laugh; I took my small seventh-grade black body to the bathroom and wept for what felt like hours.

In the 17 years that I have trudged through the soil of my country, yes, I have to emphasize that this is MY country, though I have questioned the truth of that affirmation, I remember that without the dehumanizing practice of slavery, this country will not be as it is today, so there is nothing anyone can do to strip me of my birthright.

I was not born in Africa. That is evident beyond the physical realm into which I was born, it is evident through my feeling of despair and loneliness I feel in my nation, when every race of people can trace their ancestors back to their continent, and all I can trace mine to are the cotton fields. I am not patriotic, and I don’t think I will ever be until I, or my future kids for their sake, can live in a country that loves and cherishes our black bodies. A country that will not discard or parade our black bodies on a whim. A country that will not only cheer for me when I’m in an arena, ramming my head into helmets to appease a people who called Kaepernick an America-hating, troublesome nigger, for using his black voice. In these 17 years of living in ¨urban America¨ — a contextless codeword for politicians and news anchors to use to say black America without the immediate backlash of the public — I have been forced to witness the dehumanizing and oppressive chains the institution of slavery has placed on the ankles and wrists of black people in this country.

I wish with all earnestness that I could hear our beloved mantra: ¨Land of the free, and the home of the brave,¨ and say absolutely that this is what my country fully represents. I cannot with good conscience say that I have witnessed ¨freedom¨ because for as long as there has been a soul in my body, I have seen gentlemen who share the same kinship with me be convicted, and forced into cages. I have seen men and women whose beautiful skin has been defamed by the impenetrable locks of the prison systems. I have seen mothers, single or not, living in destitution, trying to place productive black bodies into a world, and fail over and over again. Day after day, I watch these same mothers outlive the brown bodies they give birth to. I have seen how drugs plague the streets of urban America, and I watch these sick people get vilified and criminalized instead of rehabilitated.

I do know that this concept of freedom lives in that ¨other world¨ as the writer Ta-Nehisi Coates describes it.  I do know that in that other world, people are getting rehabilitation for their drug addictions; they are not treated as criminals, but mentally ill. Sometimes I wish I could scream at news anchors and say sarcastically “Just say no,¨ like the American people were told in the 1980’s, when the crack epidemic spiked in brown communities. I do know that in that other world, children aren’t watching their fathers be dragged into police cars. I know that these children aren’t being cradled to sleep by the sounds of guns singing lullabies. I know that these children aren’t losing family, and friends who they played tag with, two-stepped at cookouts with, split a dollar at the corner store with, and recreated with on what seems like a daily basis. I know that these children’s hearts don’t sink to the pits of their stomachs when they hear police sirens because those sirens represent protection and security.  For me, those sirens sound like a violinist preparing a solo for my funeral.

In my short 17 years on this earth, I have been accustomed to fear, fear that dictates every action, and every word that I speak. Fear, that if I don’t walk with a certain firmness in my country, I could be a target for a robbery or a beating. Fear that if I walked with too much firmness in my country, I would be a threat and my body could be disregarded by the hands of people who are obligated to protect and serve me. Being a black boy, or man for that matter, has always been walking on eggshells. Always second-guessing, always questioning the motive of every white person I meet, not because I’m distrustful, but because I am scared. I am scared that before I open my mouth, people will see my skin, and my dangling coarse hair, and criminalize me. I live in an America that ¨protects and serves¨ the white and wealthy, but patrols and dismembers the poor and black.

Whenever a soul is taken out of a black body by the hands of law enforcement, my heart aches like they were akin to me. I, as a black man who has had the awkward, yet, important conversation about the potential dangers of police encounters, have no choice but to be a radical empath for these families losing their precious black boys to police. We cannot allow ourselves to become anesthetized by these deaths, because it is so easy to normalize them. Each case of racially motivated deaths needs to be treated with the same combativeness that Trayvon Martin’s death brought about. What we the American people can’t do is allow ourselves to just blame law enforcement, they are the easy scapegoat. These police forces are just augmentations of an America that enables such things to happen. Sadly, we live in an America that has failed to hold a mirror up to itself, and has not realized that racial angst stems from the already ingrained fabric of racism, and mistreatment of black and brown people since its birth; an America that, at its foundation, has yet to fully acknowledge the humanity of African Americans; has yet to see my black body as the same.

Why do we need to say ¨Black Lives Matter¨ in the first place? Why do I feel I need to prove that I bleed? My nation is one that seemingly only fulfills its promise of liberty and justice to the white and rich. There is no liberty in being only 13% of the population, but leading the nation in prison numbers. There is no justice in allowing police to be the judge, jury, and executioner. There is no justice in having these officers acquitted of crimes that cost Tamir Rice his life.

Living in my country has not been living, it has been learning how to survive. Learning about what I am not allowed to do before I learn about the things that I can do. I am not an animal, I am tired of surviving. I want to live. This is the case for most African Americans. In this country, we have been surviving since we set foot in this country, and only a small percentage of us have been able to fully live.  A living will only be accomplished first with my country realizing that my bronze skin does not make me less human, and more of a threat.

When I am a father to a beautiful child, I want my country to embrace him or her with open arms and guarantee that that child’s life will be protected by the people enlisted to protect the people of my nation. Until this is achieved, we will continue to see thousands of black men and women lose their lives to police brutality. We will continue to see prisons filled to the brim with brown bodies.  Until this is achieved, every step I take in my country will continue to be an anxiety-induced minefield. Until this is achieved, asking a 12-year-old boy if he had “weapons and shit” will continue to be normalized. The same fears of the world that my great-great-grandfathers had and transmitted to their children, I will spew onto my children. And those children will spew onto their children, and the everlasting cycle of fear, and feeling unwanted in THEIR country will forever engulf their hearts into pessimism, and misery like it did mine.