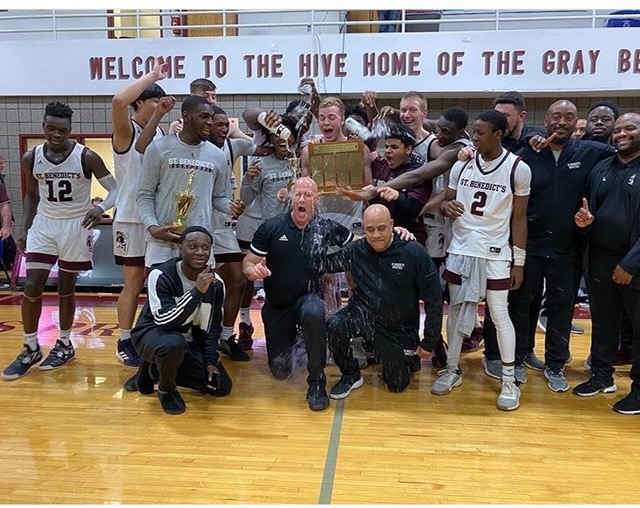 Over the span of the 2019-2020 basketball season, the Gray Bees exceeded everyone’s expectations, becoming state prep champions and becoming a national contender as they were ranked 19th on ESPN’s top 25 schools in the nation. This made St. Benedict’s the number #1 basketball school in New Jersey.

After having attained a record of 28-4 and earned the slot of 19th best high school team in the nation, the team’s overall mood and morale was high. The Gray Bees had to face an old foe, Blair Academy, who St. Benedict’s lost to in the state prep championship last season. This year, however, the Gray Bees were able to overcome Blair, 68-66 in front of a rowdy crowd in the Dalton Gymnasium.

“I was ready for senior season and the game against Blair Academy,” said Adetokunbo Bakare SY. “Being ranked 19th overall in the nation was a great feeling to have as a team and to become a national contender is a great feeling and achievement.”

Going into the fourth quarter of the game, St. Benedict’s had a six point lead. That lead was cut to two points in the final possession of the game. The Grey Bees came away with the win in dramatic fashion, sealing the programs’ seventh state title out of the last nine.

The Gray Bees performed well in big games this season, defeating teams such as The Patrick School which housed the Number one overall recruit in the class of 2021 and Roselle Catholic which housed 2 Nationally ranked players. “The overall team goal was to win the state prep championship and become a top 25 national contender on ESPN,” said Bakare, who commited to NJIT to play at the collegiate level.

With the winning of the state championship, this year’s season was considered a success, and the team is looking forward to next season.