A Strong Voice Who Cares 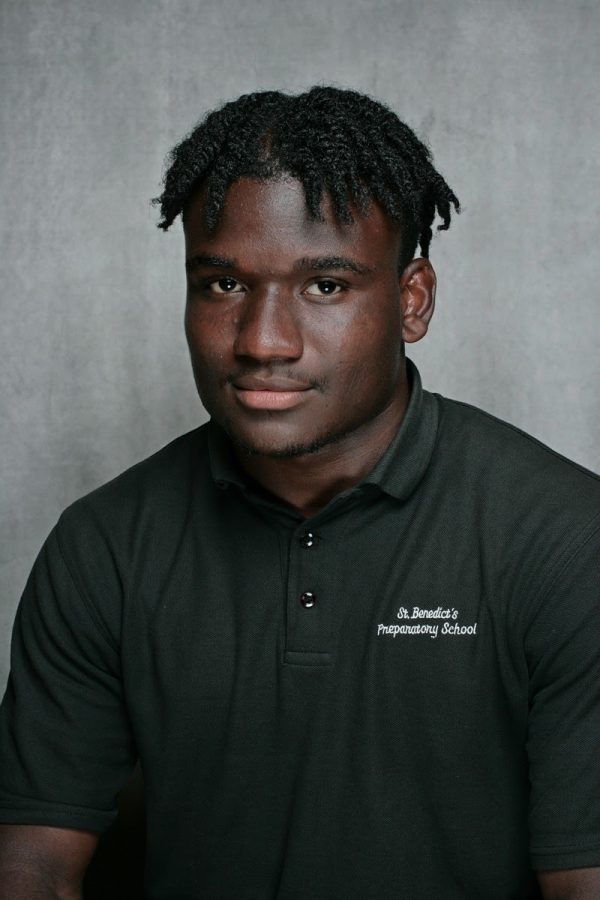 At any point during Convo, the Freshman Leader Anthony Augustin can be seen roaming the Shanley Gym, patrolling and maintaining control of the freshmen he leads. They switch up their stance when he circles around to where they are, fixing their posture to avoid being called out. Those who don’t, get a rude awakening. With a strong, commanding voice, Anthony orders the freshmen to stand and get ready for dismissal.

Anthony’s position as Freshman Leader positions him as the prime example for all freshmen. They watch him, day in and day out, as he performs his job with consistency.

Anthony was raised in East Orange and Irvington. He grew up with both his mother and his father at home. He eventually found his way to St. Mary’s School because, he said,  he kept getting in trouble at public schools.  He had to go to private school to help straighten out his act. His attending St. Mary’s led right into attending St. Benedict’s because both were located next to each other on the Newark Abbey monastery property.

Anthony had been involved in leadership before applying to take on one of the highest leadership positions in the school. He had experience in being a freshman counselor as well as being a commander for The Trail. He decided to apply for a leadership position at the senior level at St. Benedict’s because he wanted to help the community.

“My love for the school really helped push me to want to help the school out the best way I can,” he said. “I determined that leadership was the way to do that. I was also inspired by past leaders.”

“The toughest thing for leadership this year is remembering that you’re always being watched so you have to be a leader at all times,” he said. “There are some things that I used to do that I can’t anymore as a leader because I would be setting a bad example.”

Anthony knows he has to lead by example for his freshmen for their sake, and he has to focus on making sure they get the right message from him at all times. He actually cares about his freshmen and their future. He describes caring as the most important component of leadership.

“The most important quality of a leader to me is to be caring,” Anthony said. “You have to show the people that you’re leading that you care for them.”

Anthony will attend the University of Delaware and he is sure that he will remember Benedict’s and the lessons he has learned in his time.