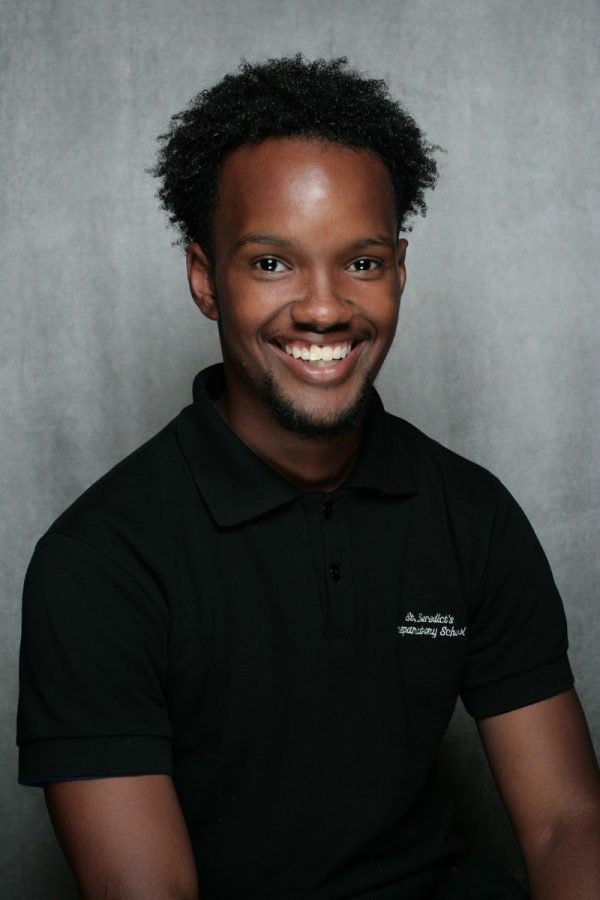 The Power of a Positive Attitude

On a Friday morning, in the center of the Dalton Gym where a full school Convocation is taking place, Transfer Leader Khyri Brewer can be seen directing traffic and making sure Convo is running smoothly. At any other given moment, you can see him arm-in-arm with a fellow classmate, swaying back and forth in song. Khyri, many will report, is always running at high energy. It’s a quality, he believes, that comes from his positive mindset.

Khyri was raised in a single parent household with his mother. He was born in Newark and grew up in Orange. Khyri describes the area he grew up in as “not the easiest” because he grew up in a neighborhood where there was gang activity. His upbringing was also made difficult by his family’s economic status.

“When I was much younger, we moved around a lot because times were not always the best financially,” Khyri said. “But, by all means, my mother promised me we would get through the rough times together, which motivated me to want to succeed.”

Khyri’s mother helped him develop the positive attitude that he has developed today. His mother “told me almost every day that, if we smile through the struggle and keep going, everything will work out,” he said. “Eventually, my mother landed a good job, and ever since we have lived steady for eight years.”

Khyri  started high school at Orange Preparatory Academy in Orange. He enjoyed his experience in Orange, but he wanted more and he believed that St. Benedict’s would offer him an even higher intellectual challenge. “My family and I felt Benedict’s would be a better fit for me because I was so goal oriented, and Benedict’s provides many opportunities that could help me be successful in life,” Khyri said. “My mother  sent me to Benedict’s to ensure my future.”

Khyri says that St. Benedict’s came into play at a crucial time in his life.

“Growing up without a father figure for the most crucial parts of my life, I had no one to teach me how to be a son, brother, or a young man, from a male perspective,” he said. “Coming to Benedict’s taught me all of the above. Benedict’s showed me that you can be at one of the lowest points in your life, have so much to prove, and still be great.”

Khyri’s road to leadership was not an easy one. He says that his transition into Benedict’s was a difficult one for him because he was used to being able to do what he wanted to do, and at Benedict’s he couldn’t do that. “When I first arrived at Benedict’s, leadership was never a possibility in my eyes,” he said “My grades were really bad, I was extremely immature, and I was lazy.”

It wasn’t until he found a mentor in an upperclassman, that he began to pick up the pace in his effort. “Carlos Acosta ‘18 was my section leader the year I transferred to Benedict’s,” he said. “Immediately, he took me under his wing and pushed me every day.”

Another experience that changed Khyri was The Trail.

This experience also played a big role in Khyri’s choice to pursue leadership. Khyri always was searching for someone to look up to, and he found it. He wanted to be able to give back what he was given. “Ultimately, that is why I chose to go for leadership — to give others what Carlos and Richard gave to me which was an older brother, a purpose, and an opportunity,” he said.

Khyri described his senior year as a difficult one as the unfortunate circumstances during the year have been difficult to deal with on top of the fact that senior year is difficult, especially with the added factors of leadership and responsibility.

“The toughest thing about leadership this year would definitely be fighting through all of the losses we took as a community this year,” he said. “A few of our brothers lost their parents. And we lost two extraordinary teachers who mean the world to us, Mr. Bill Petrick and Mr. Spencer Vespole. Trying to keep the morale of the community high was not easy at all but we pushed through together and still made it a great year.”

Through this challenging year, he learned to tough it out.

“The most important quality of a leader to me is resilience,” Khyri said. “There will be a countless number of times where you will be put in the most difficult situation but you cannot give up for the sake of the people you are leading and for what you stand for. The best thing you can do is be strong and when life knocks you down, get right back up.”

Khyri has yet to commit to a university, but he plans to double major in psychology and criminal justice.