Is Cheating Rampant at Saint Benedict’s? 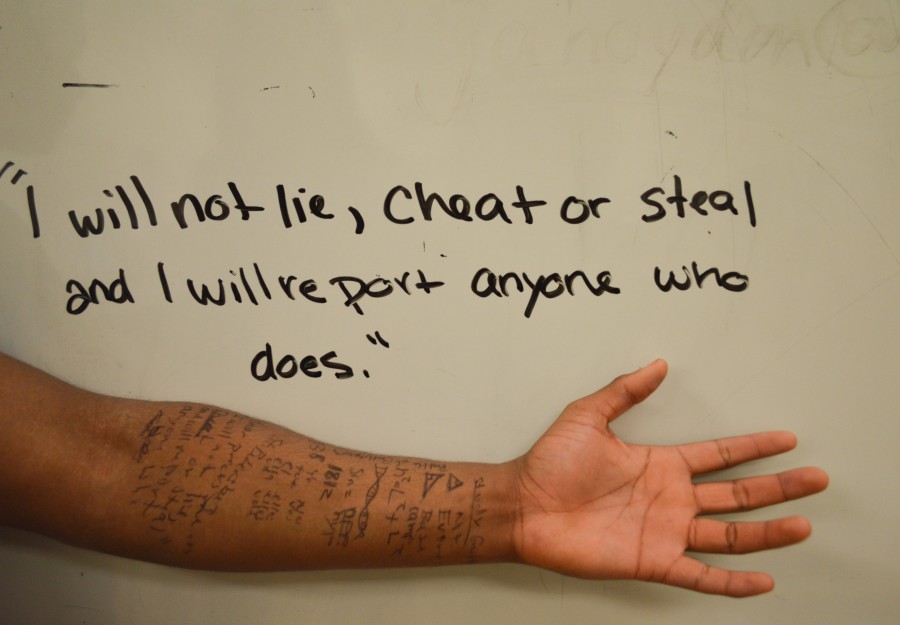 Students are prompted to sign the honor code whenever they take a test. Anyone who is found violating the honor code is sent to the Honor Code Commitee

In a few months, upperclassmen will usher a new batch of freshmen through the school entrance. Each newcomer will be handed precisely three things: a binder, a notebook, and a copy of the school Honor Code—”I will not lie. I will not cheat. I will not steal. I will report anyone who does.”

Four years after completing this rite of passage, one senior at St. Benedict’s Prep says that many of his fellow students have very little regard for the code. “There is an honor problem at this school. The problem in this school is that too many people are doing it (cheating),” he said. “Teachers are not good enough at catching students and students are getting better and better at cheating.”

This senior, who requested anonymity, has regularly cheated in his math class with the help of his classmates.  “In my class, we switch our test between a group of friends to do each others’ problems when [the teacher] turns his back,” he said.

His classmate, another senior who also requested anonymity, also admits to cheating. “I’ve cheated in every single class I’ve had here except physics,” he said. “In all of the classes, I’ve usually had the tests beforehand. Cheating is just too easy at St. Benedict’s Prep.”

These two students’ personal experiences with cheating are not isolated incidents. In recent months, there have been several reported incidents of plagiarism and cheating. Teachers in the English, History, and Mathematics Departments have expressed concerns about academic dishonesty in their classes and St. Benedict’s Prep as a whole.

English teacher Cavil Henriques recently reported five separate incidents of plagiarism in his junior English class. “Kids cheat in my class because it’s easier for them to copy someone else’s work than to do it themselves,” Mr. Henriques said. “A lot of them also don’t study and think they can succeed by cheating.”

Mr. Henriques has a specific set of consequences for cheating in his class. “If I catch anyone plagiarizing, I give him a ‘0’ on his essay, which is 35 percent of his overall grade,” Mr. Henriques said. “I review this policy over and over with students.”

Sophomore World History teacher Charles Miseo ‘03 has also administered consequences for incidents of cheating in his class. “If I catch students cheating on tests, I rip up their tests and give them ‘0’s.’ I do the same for plagiarized papers,” Mr. Miseo said.  However, in one situation, he gave a student the opportunity to redo a plagiarized paper for partial credit, but did not receive the assignment.

When teachers catch students cheating, they report the incidents to the Honor Code Committee and its chairman, history teacher Douglas Sterner Ph.D. According to Dr. Sterner, cheating is “either using notes or resources not allowed when taking a test, or in the case of a paper, taking someone’s work and presenting it as your own.”

School administrators say that it is difficult to evaluate the scope of cheating here. “Nobody knows how large of an issue cheating is at St. Benedict’s,” Dr. Sterner said. “The Honor Code Committee isn’t made aware of every incident.”

Furthermore, Dean of Academics, James Duffy, said that he has not heard about rampant cheating. However, he addressed cases where students were selling old tests at the beginning of the Winter 2015 term.

“I’m always concerned about incidents of cheating,” Mr. Duffy said. “But the tricky problem of catching cheating is proof, and the most I’ve confirmed so far is [cases of] plagiarism.”

As a former World History teacher, Mr. Duffy also has tried to prevent cheating in his classes before. “Not changing tests or leaving the test the same for years is just inviting someone to cheat on them” he said. “As a teacher, I had three different versions of tests for three different blocks.”

The Honor Code Committee tracks reported incidents of cheating and summons students before it on their second reported offense. Its members—math teacher Ima Richburg, biology teacher Chris Cogswell, and several senior leaders—ask students to explain themselves, their incident and any extenuating circumstances. After deliberating, the committee recommends courses of action to the students’ teachers.

However, Dr. Sterner believes that students at St. Benedict’s cheat due to a more widespread reason. “Over the decades that I’ve taught, the main change with the attitude about cheating is that students have grown more comfortable with cheating and less reluctant to do so because they’ve grown up with different values,” he said. “The passage of values from one generation to another has been eroded by what’s happened to family life.”

Math teacher Tony Frey has noticed a similar shift in values over the past few decades. “Twenty seven years ago, I found it very interesting how very few students would cheat,” he said. “There wasn’t nearly the amount of cheating back then as there are now, and I blame that on the culture of the students today. The students are more interested in getting the grade they want than learning anything.  The culture of grades has changed and that is to students’ detriment.”

Several students have reported that Mr. Frey’s Algebra II final exam was widely distributed during the end of the Fall 2014 term. One of the copies of the exam even had the name of one senior leader, who requested anonymity. “I turned in my exam at the end of class and was shocked to learn that it had made its way into someone’s hand,” the senior leader said.

Mr. Frey, who is aware of this situation, said that the efforts to cheat were unsuccessful because students “don’t get credit for the answer, they get credit for doing the work and getting the right answers.” According to Mr. Frey, he gives all students a review paper that helps them “cheat” in a sense because it contains questions very similar to those on the final exam.

“I prevent cheating in my class by teaching all of the material. I make sure that all students know how to do the problems,” he said.

But at least one student said he expects more of some teachers. This student, who requested anonymity, said that he cheated in an advanced  class despite performing above average without unauthorized aid in all his other classes. “I cheated in this class because I wasn’t very well prepared,” he said. “This applies to almost every student in [the class]. You’re not taught properly, so it gets to a point where if you don’t cheat, you’re going to fail.”

Several faculty members here have expressed frustrations at the way in which the school administration currently handles cheating incidents. “I would like to see the administration put more blame on students than the teachers,” one teacher who asked to remain anonymous said. “The students are the ones cheating and not learning anything from the consequences.”

And even many students here desire to see a change in the way that cheating is handled.

The “A” student who cheated in a language class said that he would have been deterred from cheating if there were more serious consequences. “There should be further administrative punishments, where a Dean, (Headmaster) Fr. Edwin or (Assistant Headmaster) Mr. Scanlan suspend or expel a student for cheating. This would make me and other students more afraid of cheating,” he said.

However, Mr. Duffy said that St. Benedict’s takes a holistic approach to cheating incidents. “It is a little more complicated here when we try to look at the individual as a whole person,” he said.

In fact,  the Honor Code Committee is a large part of the remedial process at St. Benedict’s. It counsels teachers on consequences that may be most conducive to the students’ learning. Based on his experience as a teacher and member of the committee, Dr. Sterner believes that students themselves can do the most to stop cheating incidents at St. Benedict’s.

“The most effective way to counter that cheating culture is through students,” he said. “Later on in life people may look back and single out a teacher. Right now, peer pressure is far more influential to students than any teacher input.”

One Response to “Is Cheating Rampant at Saint Benedict’s?”