Witnessing Peace at the United Nations 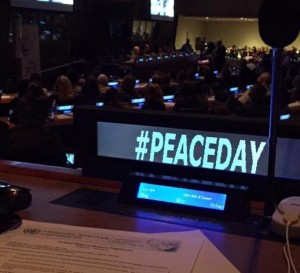 Leading a contingency of seven other youth from the YMCA Civic Engagement Programs of New Jersey, I was honored and amazed to bear witness to the peace initiatives of youth activists from across the world at the 23rd Annual International Day of Peace at the United Nations Headquarters in New York. Those in attendance included Secretary General Ban Ki-Moon, UN Messengers of Peace Jane Goodall, Michael Douglas, and Yo-Yo Ma, and the Secretary General’s Envoy on Youth Ahmad Alhendawi.

The event, held in Conference Room 4 of the General Assembly building, displayed various youths’ efforts to promote peace in their communities and the world. The program began with remarks from the Secretary General, who prefaced the youth presentations by emphasizing their importance to international peace efforts: “Very often we call you young people the leaders of tomorrow, but very often, you have taken leadership roles today. That’s why I’m very happy to meet you all today.”

The UN Messengers of Peace, world-renowned primatologist Dr. Jane Goodall and actor Michael Douglas delivered heartfelt and moving speeches after the Secretary-General’s remarks. Dr. Goodall spoke about her experience with her “Roots & Shoots” nonprofit organization while Mr. Douglas emphasized the nonproliferation movement. UN Goodwill Ambassador and musician Herbie Hancock followed suit and testified to the peaceful power of music. These celebrities’ experiences both in the commercial world and with international peace efforts were an inspiration to the hundreds of students assembled in the room.

Following these remarks, we participated in a series of interactive presentations, including a performance by UN Messenger of Peace Yo-Yo Ma, before listening to a series of presentations about youth peace efforts from across the world. The most inspirational project was presented by Zuhal Sultan from the Euphrates Institute in Iraq. As an advocate of youth music in her country, Zuhal founded The National Youth Orchestra of Iraq. This organization continues to promote peace through music literacy and public performances in a country that is torn by civil wars and misunderstandings. By the end of these presentations, our group was amazed and empowered by the speakers, presenters, and peers we had met.

Soon after the event at the United Nations had ended, our group from the YMCA Civic Engagement Programs present our own community service efforts to Envoy Ahmad Alhendawi. As part of a panel moderated by former Ambassador John W. McDonald, the author of the resolution that had introduced the International Day of Peace, we spoke candidly about the issues present in our communities and our distinct efforts to promote understanding and youth civic service. We outlined our regional “Days of Service” and our program’s government simulation conferences aimed at creating amiable atmospheres. At the end of our presentation, we garnered positive feedback and resounding encouragement from Envoy Alhendawi.

Overall, I was galvanized by my participation in the International Day of Peace. I heard speakers and made memories that are going to influence many more peace efforts in the upcoming future.