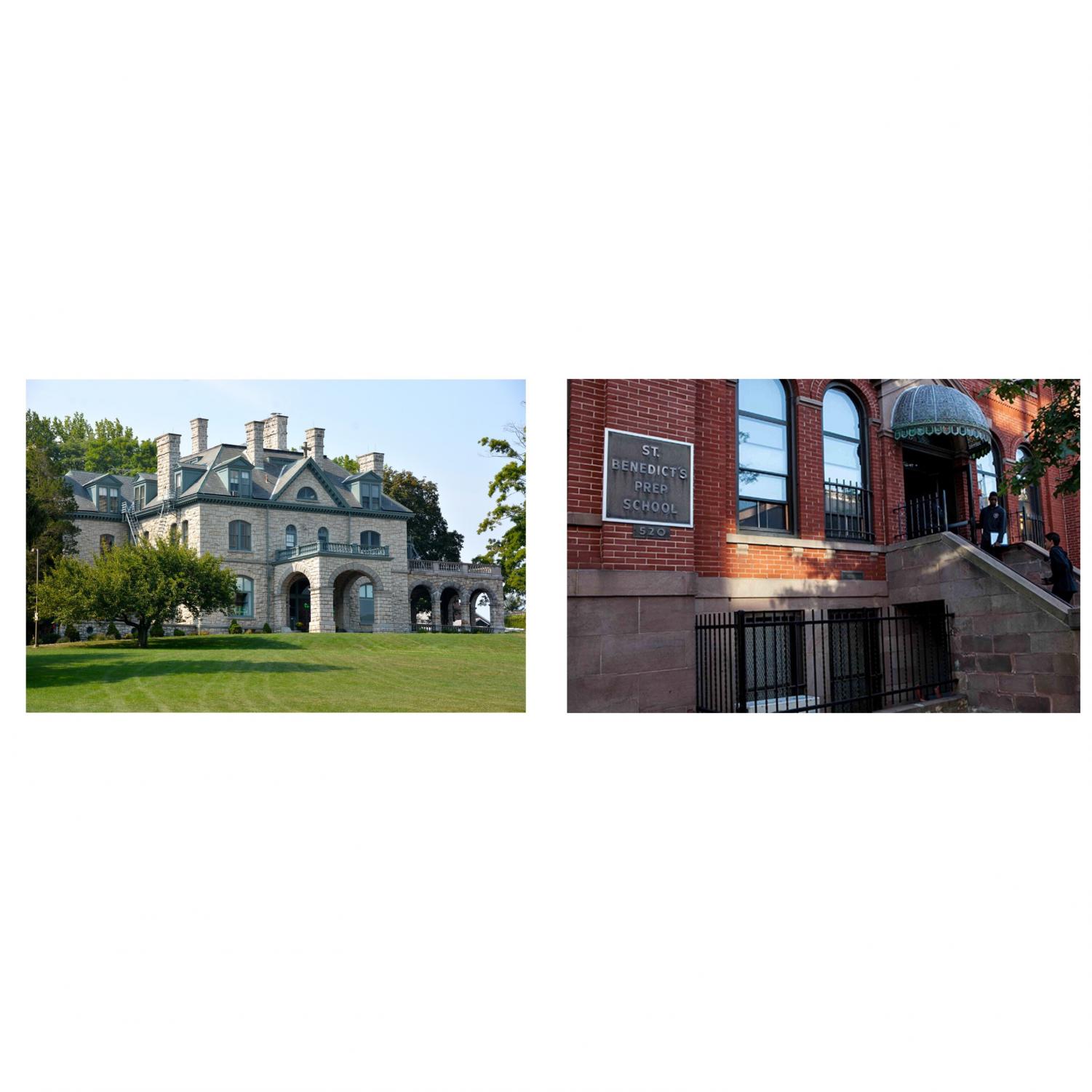 School officials from Delbarton and St. Benedict’s are contemplating ways to renew their relationship. On the right is the iconic 520 entrance of St. Benedict’s. On the left is the beautiful Old Main of Delbarton.

A leader of Delbarton School has created a special task force in support of an idea proposed by a St. Benedict’s student advocating for a closer relationship between the schools. In an interview Friday, Delbarton Headmaster Fr. Michael Tidd, O.S.B., said he had convened a task force of student leadership and interested faculty to develop a plan.

“Between the two major Benedictine secondary schools in New Jersey… there’s so much shared history, shared spirit, shared goals, and it’s long past time to collaborate in an active ongoing way,” Fr. Michael said. He added, “We’ve kind of historically reached a turning point to be able to renew the relationship between the two schools–and the two Benedictine communities, to be quite honest.”

In November, Benedict News Editor-in-chief Jules Gouton SY wrote a piece pleading for the two schools to renew the connection that they once had.

“SBP students have lost brothers and, if nothing is done, the values and future of Delbarton and SBP must be called into question,” Gouton wrote. “As SBP men we must stand up and preserve our history and traditions.”

Jacob Amaro SY and Jules Gouton, the editors-in-chief of The Benedict News, in December sent an email to Jessica Fiddes, Delbarton’s director of marketing and communications, describing their thinking and attached the op-ed. Ms. Fiddes, in turn, forwarded the information to Fr. Michael.

“We have a long history together — not always a pleasant one,” Fr. Michael said. “But that’s how human communities are. Benedictine communities are not perfect. We make mistakes. We make judgments about people. We harbor grudges, or we become neglectful. It’s also a way for us to reconcile and to show others how you can reconcile with one another. So I just took the article and thought it was incredibly insightful and very encouraging.”

“I’m grateful for the kids that are working on this,” said SBP Headmaster Fr. Edwin Leahy, O.S.B. “It’s a great idea and I’m all for it. I look forward to seeing the direction things take.”

In the past few years, Fr. Ed has developed ongoing collaborations between SBP and schools in the Netherlands and Israel. The possibility of a strengthened rapport between the schools also struck a positive chord with Assistant Headmaster for Student Life Dr. Ivan Lamourt.

“We all tend to spend our lives in a closed shell — people in the suburbs and us here in Newark,” he said. “So the more we interact with each other and try to make things better, I think is really important.” He added, “Build hope not walls.”

Gouton, the Benedict News editor who wrote the essay, said he viewed the turn of events very positively.

“I’m happy that there are other people thinking this way — that I’m not the only one thinking of bettering relations with our brothers at Delbarton,” he said.

Upon receiving the email from St. Benedict’s, Fr. Michael said he reached out to teams of students and faculty at Delbarton in Campus Ministry, Diversity Among Peers, and the school’s Council of Seniors.

“Right about now was the time I was going to ask them to report back to me about what we would like to do as a first step,” Fr. Michael said.

Benedictine values prevail at Delbarton, as they do at SBP. Fr. Michael discussed his students’ extreme commitment to service in their wider community, including tutoring kids, working with disabled children, and more. Fr. Michael went on to talk about different projects Delbarton and St. Benedict’s could potentially collaborate on in the future.

“We participated with Catholic Charities in its toy drive at Christmas. That could be something that could easily be a way through which the schools could collaborate,” Fr. Michael said.

Further service projects could potentially be worked on between the two schools as the year goes on, according to officials at both schools.

“We thought an initial way we could collaborate with you might be for both schools to identify a joint service project — something really significant that would draw on all of our resources and really make an impact,” Fr. Michael said.

One Response to “Turning point: Leaders Agree to Renew Ties Between SBP and Delbarton”