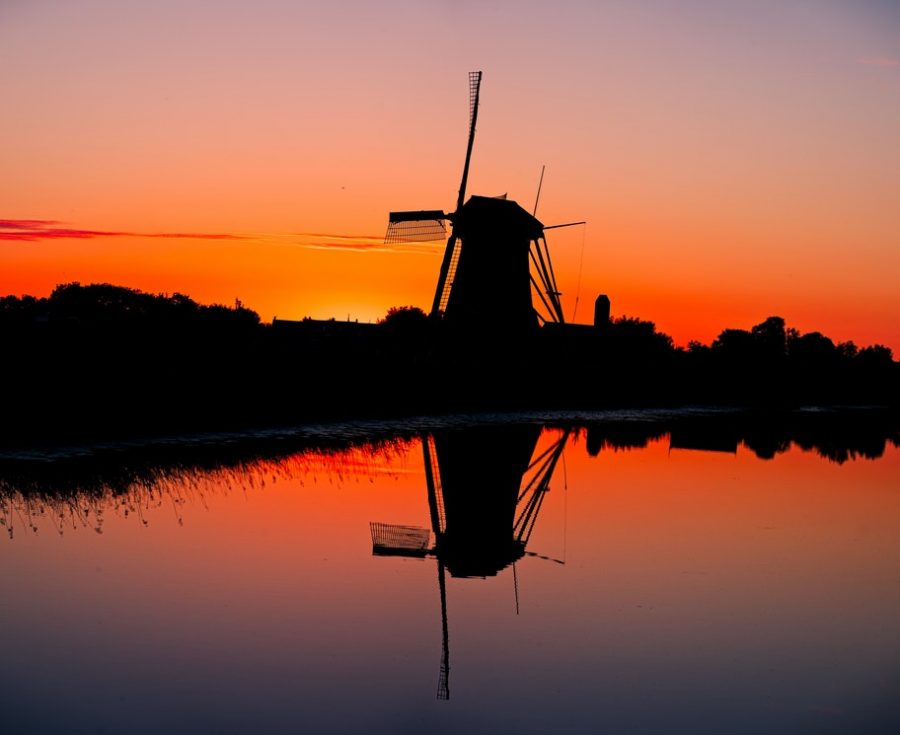 Gallery|5 Photos
Malcolm Lightbody/Unsplash
St. Benedict’s students arrive in the Netherlands for their exchange visit, both tired and thrilled.

On Thursday morning, after a seven-hour flight that followed a full day of school at SBP, we arrived at Schiphol Airport in the Netherlands. We were all met by our hosts and I left with my host, Carlien, and her father.

I was received well by Carlien’s family at her home. Then, I had five minutes to shower and we were on our way to her school. As I had only slept for about two hours, I did not feel well prepared to go. I rode a bike, along with Carlien, to her high school. I parked my bike, walked in without scanning any kind of I.D., and walked around the school.

We were welcomed by the vice principal and ate stroopwafels. It was a joy to see our friends who came to Benedict’s months ago (in September). We had gym class, and played games like hockey, soccer, dodgeball, basketball, and a game called bounceball.

Even after the long flight, the Benedict’s guys competed with Dutch students in a group  competition. We took a class on the basics of Mandarin, and, at the end of that class, all the students forming the Holland exchange program were instructed to find recipes to cook a dinner for their host families. I searched for a recipe for a typical Peruvian dish called Chaufa. Later that day, Carlien and I went on our bikes to the grocery shop to buy the supplies for the dish. I finished the day with a piece of bread with Nutella, and tea.

When I went to bed, I still jet lagged. As I fell off to sleep, I thought about what the week was going to bring us.

This morning was a very positive morning, due to the fact that I had slept for 13 hours, after our lengthy plane ride. As I woke up, my hosts– a very nice family — greeted me with an amazing breakfast, which was ham and eggs with delightful bread (bread in Holland is amazing.) Once we were done, we went to our bikes and began riding to school with our friends, Luke and Jillian. It was a short eight-minute bike ride from Limmen, where my host lives, to Castricum, where the school is (Jac P. Thijsse College).

Today at school was a very special day because we had to cook dinner for ourselves, our hosts, and our hosts’ family. My host and I made spaghetti and meatballs, and in my opinion the meal was delicious. It was a great bonding experience and a better way to connect with our families for the week we were spending here.

After we finished eating dinner, we headed to one of the hosts’ homes for a game night with the group, which was very good fun. Finally we came home and went to sleep.

On Monday morning I woke up very early because that was the day that we were journeying to Amsterdam.

After breakfast, my host, Casper, and I biked to the train station in Uitgeest which is fairly close to his mother’s house in Akersloot. We made it a little too late, we missed the first train but quickly boarded another train that took a bit longer to get to Amsterdam. In Amsterdam we immediately joined the group for a tour in the canals of Amsterdam.

We learned about the architecture and some of the history of the buildings along the canal. After the tour we had some time to explore the city. We then arrived at the Anne Frank Museum where we were given lessons and historical background of the time in which she lived. I gained a better understanding of her situation whilst at the museum, after having already read the book. When our tour was over, we took a break to explore some more. After a long day in Amsterdam, we went home and I proceeded to do homework. A very fun day, one that I will never forget.

On Tuesday “Dinsdaag” (in Dutch) morning, I woke up at around 7:30 a.m. to get ready for the day. I set three different alarms knowing how unreliable I am when it comes to waking up. Luckily, I rose on the last alarm. My host and I took a 30-minute bike ride to school which wasn’t that bad, but the weather made it ten times worse. While I cycled the rain and wind blew against me, so it was a rough trip to the school.

When we arrived at school my host and I started the day’s activities with a lesson called “ACE.” During the class I worked on my assignment, which was to give an elevator pitch about my host’s school in Holland at the end of the class. An elevator pitch is a one-minute presentation on a topic. In that one minute I have to present my topic to the class and try to persuade them. My presentation ended up going great; the teacher loved it and so did the students. The next three lessons were all taught in Dutch so I did most of my homework during that time. We also had two 25-minute breaks in between the classes and a lunch break on top of that.

After the four lessons came to an end, my host and I met the rest of the group with our bikes at the front of the school to get ready for the bike history tour in Castricum. The tour was great and I learned so much. The best part was visiting bunkers and shelters that the Nazis used in Castricum during World War II. After the bike tour ended, we went to a bowling alley in the small town of Heilo, which is also where I lived for the week. I didn’t do so well bowling, but it was still enjoyable because it ended up being a great bonding experience with the group.

Today we went to Alkmaar to go ice skating at a popular skating rink called De Meent. The facility was very nice and even had two rinks — one for more professional speed skaters and another for beginners like most of us in the group. We had a great time and, even though we fell plenty of times, we laughed it off and helped each other back on our feet.

Then we went to Alkmaar for a cultural scavenger hunt through the city. Although it was raining, it was a good experience. The activity was designed by a teacher and was based on a location app. We had to find monuments around the city and post pictures. Afterward, we had some free time and went to a restaurant for hot chocolate.

We ended the day with a dinner at a restaurant called Happy Italy. The margherita pizza was good. Many people in the group tried a nutella pizza for the first time. We made the night memorable by pretending it was Mr. Henriques’ birthday, and we sang for him. We then went to a pool and darts bar called Sport Cafe. We played pool and watched a very intense Champions League game between A.S. Roma and Porto. Porto came out on top for the win, breaking the heart of UD1 Ben Heineman as he is a devout fan of A.S. Roma.