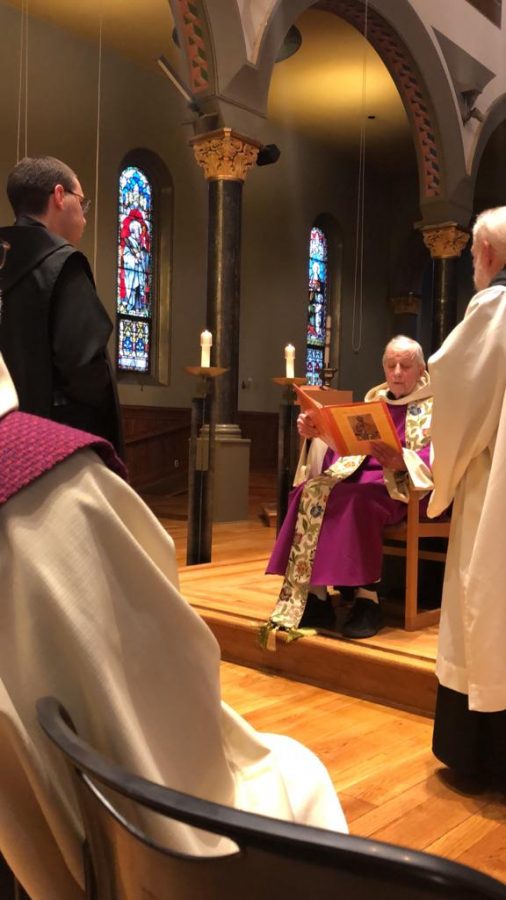 Br. Asiel Rodriguez, O.S.B., is accepted as a Candidate for the priesthood.

In the Midst of It All

Like every other teacher at St. Benedict’s on Friday, Br. Asiel Rodriguez’ plate was very full. School officials announced early in the day that SBP would move to distance learning online for two weeks and send students home. Teachers, in between teaching, pulled together hefty study guides for students, taught themselves Google Meet, and bid hasty goodbyes to international and other dormitory students headed home to faraway places.

For Br. Asiel, a Benedictine monk at Newark Abbey who teaches Spanish and ESL, it’s an especially challenging time. He, along with Br. Simon Peter Clayton, O.S.B., will profess Solemn Vows to the Abbey next Saturday. This means they will pledge — through an ancient religious ceremony — to work and live at the monastery for the rest of their lives. It’s the biggest day of their adult lives, akin to a non-religious person’s wedding day. Br. Asiel, in addition, will be ordained a priest later this year.

There’s been so much preparation involved, spiritually, intellectually, and emotionally. Ideally, the time immediately leading up to the service should be serene. This could help the monks focus on their big decision and mentally prepare for it.

But the past week has been anything but calm. Concerns grew about the spread of the coronavirus. And the gloom of the week expanded when the monks learned Wednesday that the party to be held in their honor after the Saturday ceremony, to be attended by their families and the St. Benedict’s community, had been cancelled due to the virus. On Thursday evening, Br. Asiel also found out he would be sending home many of the international students he had worked with since they had arrived at Benedict’s years before, speaking little to no English. He knew he would not be seeing the Seniors again. The pain of letting go, he said, was profound.

By Friday afternoon, Br. Asiel was feeling the heaviness of the world. Why is everything going wrong? Why do I feel so sad? He thought of Christ on the Cross, who cried of abandonment as he was dying. While Br. Asiel knew that many people care for him and support him, he still felt isolated at that moment. Like Christ, Br. Asiel felt deserted.

And then. After a day of rain, the sun emerged Friday afternoon.

Today, Br. Asiel explained that he doesn’t understand it but, as he walked to 5 p.m. Mass and felt the sun on his face, he started feeling better. “To me, it felt like God’s embrace,” he said. “It was as though God was letting me know He had not forgotten me.”

Mass was meant to be special. Br. Asiel could feel his spirit brighten. The Rite of Candidacy, a short religious ceremony, is a necessary step, meant to initiate a man awaiting ordination. During the Mass, Abbot Melvin Valvano, O.S.B., presided over the planned ceremony. Br. Asiel was called to the altar.

Abbot Melvin: “My child, the pastors and teachers in charge of your formation, and others who know you, have given a favorable account of you, and we have full confidence in their testimony. In response to the Lord’s call, do you resolve to complete your preparation so that in due time you will be ready to be ordained for the ministry of the Church?”

Abbot Melvin: Do you resolve to prepare yourself in mind, heart, and spirit to give faithful and compassionate service to Christ the Lord and his Body, the Church?”

Abbot Melvin: “The Church receives your declaration with joy. May God who has begun the good work in you bring it to fulfillment.”