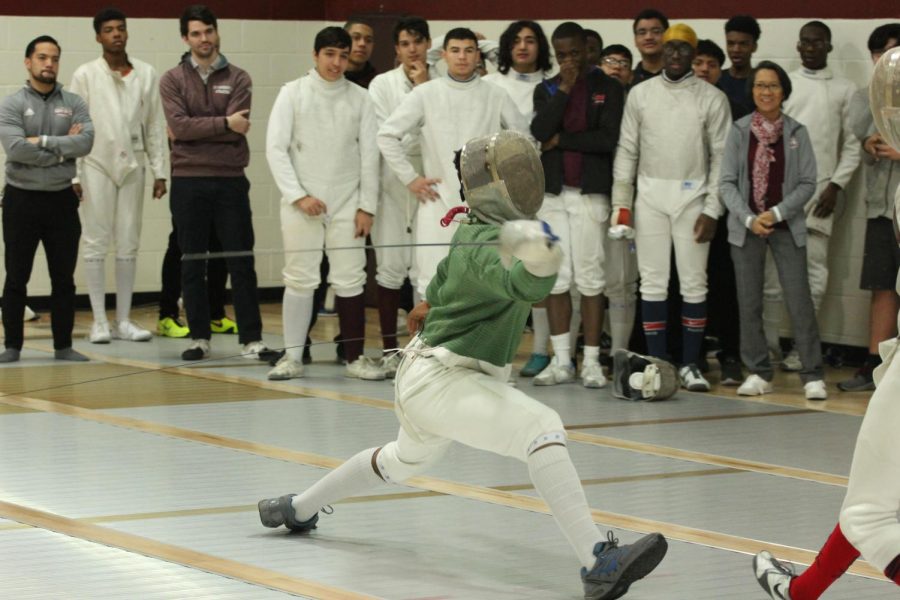 The St. Benedict’s Prep fencing team set out to achieve three goals this winter season: going undefeated, placing first at State Preps, and placing in the top three at Cetrulos.

Although the team did not reach all its goals, there were still successes, according to the team’s Assistant Coach Elliott McFarland ‘12.

“It just shows that we have more work to do in the off season,” said Mr. McFarland, who is also a math teacher at SBP.

The team went 13-3 this season and is looking to improve its record next season through hard work and dedication in the off season.

Although the fencing team did not accomplish all of its goals, the team enjoyed many high points  this season, proving that it could compete with the best in the nation.

The fencing team proved a victor over  Ridge High School this year. Ridge is the team that came in first place this season in Cetrulos,  the biggest high school fencing tournament in the world. The fencing team also finished second place in States this year, with the sabre squad placing first and the epee and foil squads placing third.

One of the team’s challenges for next year will be competing without the present seniors, three of whom are starters: Nolan Williams, Richard Ohia, and Seun Eisape.

Not only were they great fencers who helped the team win matches, Mr. McFarland said, they were also leaders on the team that younger guys could turn to for assistance. In addition, he added, they were captains who also assisted the coaches.

“Our captains run the team,” said Coach Richard Molina, a physics teacher at SBP. “They shoulder a lot of responsibilities for running the day to day workouts.”

The seniors, however, are upbeat about the team’s prospects going forward.

“The rest of the seniors and I believe that the team will continue to improve if they stay dedicated,” said Head Captain Richard Ohia. “They will also need people to step up and become leaders on the team.”

Ohia added that last year’s team captains well prepared him for his role this year.

“I hope that my leadership and time with the team this year has done the same for the younger guys,” Ohia said.

Nolan Williams, who is ranked as one of the nation’s top fencers, will be difficult to replace, Mr. McFarland said.  Williams was ranked third in the U.S., which allowed him to be selected for the under 17 US National team.

“Nolan is one of the best fencers I ever got to coach,” Mr. McFarland said.

Although the loss of such talent  next season will affect any team, Coaches Molina and McFarland said they remain optimistic because of the dedication demonstrated by the younger guys.