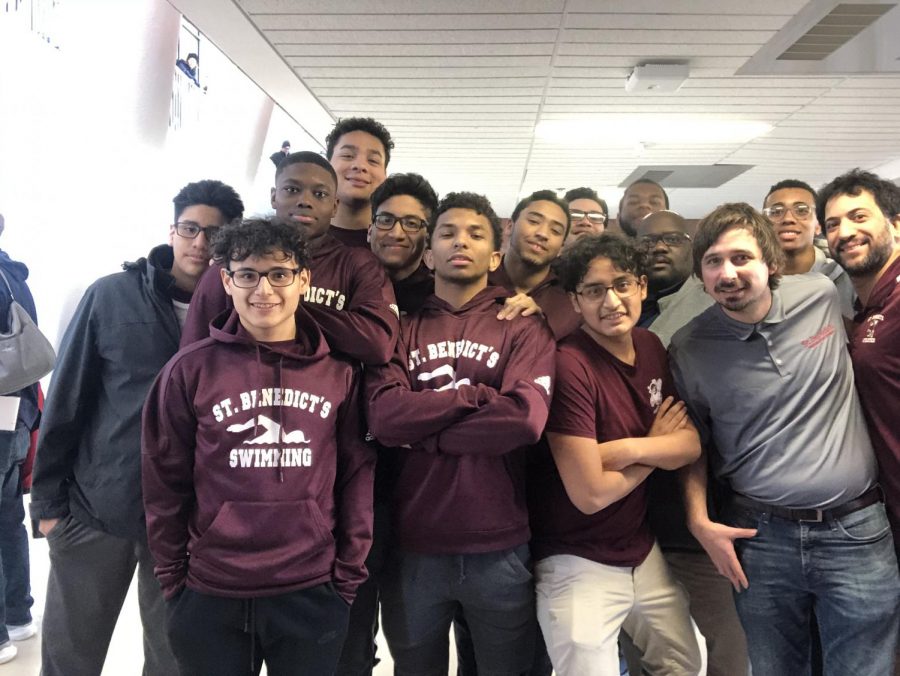 Swimming: A Year to Remember

This past swim season, history was made both within our school community and beyond. With a score of 36 points, placing them 22nd, this year’s team placed the highest at Easterns Championship, in Lancaster, Pa., since 2011. It was also the first time that seniors on the team experienced a winning swim record of 3-1.

This year’s swim season was also unique in that the graduating seniors were freshmen when the Swim Coach, Jose Cruz  ‘97, began his coaching career at St. Benedict’s.  “We were able to hit our stride as a collective really for the first time in my four years here,” Coach Cruz said.

When Cruz first began coaching, many were intimidated by him. “I thought he wanted us to quit,” said Ammon Moore SY. But, after getting to know his coach some more, he realized his coach did everything for a purpose. “He’ll sacrifice anything for the love of his swim team,” Ammon added.

The team’s success is attributed to the hard work its members devoted behind the scenes. “We were committed to each other and set an example for the younger guys,” said Justin Correa SY. “We were all mentally prepared, ready to work hard, and we had Coach Jose.”

This year, the team tried something new. Three days out of the week, the varsity swimmers spent 45 minutes in “The Box,” a dedicated workout space at the high school, before hopping in the pool for practice. This was done with the goal of  integrating more strength-building exercises into their cardio-dominated workouts.

Swimming itself can be a grueling sport. It demands a lot from its athletes not only physically, but mentally, as well. Each day they “pushed themselves to their breaking points” according to Ammon Moore. But despite the struggles, the majority of the swimmers continued to show up for practice day after day, week after week, and year after year.

It was also the first ever time that any of the athletes on the team, seniors included, had a banquet: recognizing their accomplishments by handing out Varsity Letters.

At the end-of-the-year banquet, all of the seniors gave speeches that reflected on their time swimming and gave advice to the swimmers coming behind them. They shared stories, but almost every story had something in common — the thought of quitting. Their stories shared themes about struggling to motivate themselves to continue to do the sport. But more importantly, they explained why they didn’t.

Justin Correa SY said that it was things like his coach’s phrases like “be comfortable with being uncomfortable” and the motto that “Benedict’s hates a quitter” repeated in their heads.  Rafael Rios SY also shared that he and his team members drew motivation from remembering their teammates who were relying on them, and because of their care for their coach and for their school. For a team, when time after time most of the athletes wanted to quit, their perseverance was graciously answered with the accomplishments that they were able to achieve.

“They started off as nice boys and are leaving great men,” Coach Cruz said. “Swimming fast is one thing. But being a good person and doing the right thing when no one’s watching — being men of character — that’s all you want in a team.”