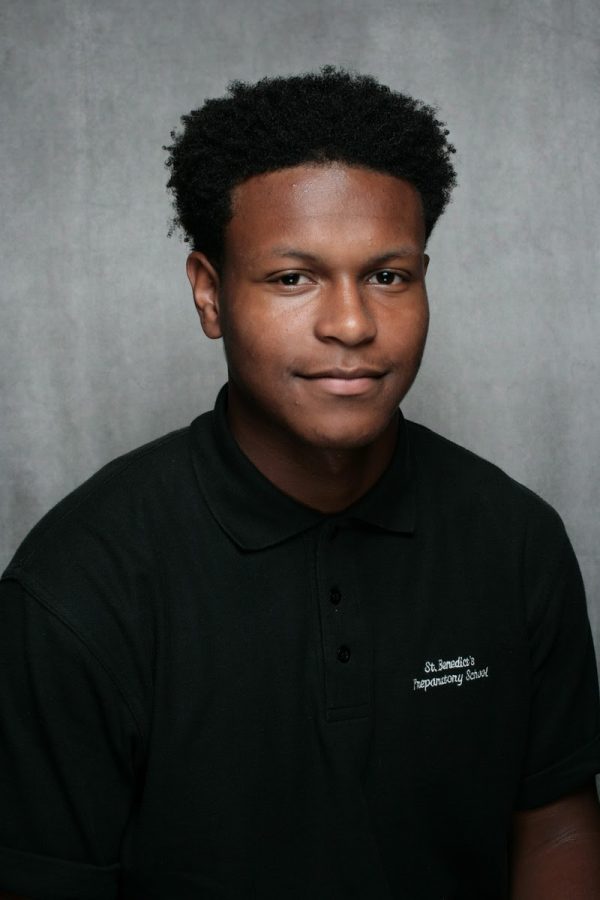 Upon entering the Shanley Gymnasium during Convocation, the first person visible is the Maroon Section Leader, quietly patrolling his section, making sure everyone is on point. He can be seen on the side, addressing specific groups in his section after Convo. He will be speaking to them about their behavior, warning them that if it doesn’t improve there will be consequences.

This leader is Ibrahim Stradford. He describes himself as a leader by example who likes to connect with his groups on a personal level.

“I’d say Ibrahim is a leader who is respected by many and gets stuff done,” says fellow Senior Seven member and Transfer Leader Khyri Brewer.

Stradford grew up in three different homes, being with both his mother and his father in separate homes and sometimes staying with his great-grandmother. “My parents divorced when I was 7 years old, and ever since then I’ve been living in various family households,” he said. He spent time with various members, rotating between homes. “I would usually stay with my mother during the week, and go with my dad and stepmom on the weekends,” he said. “I would stay with my great-grandmother some weeks as well.”

When he graduated from eighth grade at Good Shepherd Academy in Irvington, it was time to pick a high school, and at first, Ibrahim wasn’t so eager to become a Gray Bee.“I didn’t want to come to Benedict’s initially; but after long conversations with my father, James Stradford ‘90, I strongly believed that it could benefit me and my future.”

Ibrahim trusted his father’s recommendation, and decided to attend St. Benedict’s Prep his freshman year. In his first year at St. Benedict’s, Ibrahim struggled. At his middle school, he was used to getting A’s without studying, but that method didn’t work for his freshman year. He got his first C, and that made him realize he would have to put in more work to get the grades he wanted. As he acclimated to what would be required of him, he began to improve.

As he headed into senior year, Ibrahim developed leadership aspirations.  His experience as a counselor (both transfer and freshman) and as backpacking instructor would qualify him, he believed. And he knew he simply had the desire to lead his Benedict’s brothers to success.

Ibrahim’s father also had an impact on his decision. “My father was Maroon Section Leader here as well and he explained to me how leadership helped him and how it would help me,” he said. Ibrahim decided to take on the challenge of leadership, realizing that it would probably put him in situations that would force him out of his comfort zone.

“Leadership is a service and I was ready to sacrifice my wants for what our community needed,” Ibrahim said. “If you know me, you know that I am a laid back guy, so being a section leader was not necessarily ‘comfortable’ for me at first. But, as a leader, I had to step out of my comfort zone because that was what the community needed.”

When Ibrahim became the Maroon Section Leader for the Class of 2020, he was excited, but the position has not come without its difficulties. One those difficulties is the stress of the responsibilities placed upon Ibrahim, on top of keeping up with his own work.

“Oftentimes, I would allow my emotions to get the best of me and determine how the rest of my day would go,” he said.  “As the year progressed, I’ve improved that weakness. As a leader, you shouldn’t let your emotions determine your behavior and actions because that is a bad example to show your followers. There were some mornings when my section would not cooperate, and I would just let it be because I was frustrated with our behavior. But, as a leader, you have to learn to put your feelings aside for the sake of your community.”

Ibrahim believes that his most important leadership quality is humility. A title of leadership does not put him above anyone, he said. “The ability to carry yourself as a leader and not think you are on a higher tier than your followers is essential to being an effective, respectable leader,” he said. “Leadership, in my eyes, is a responsibility to improve your followers while improving yourself.”

Ibrahim will be attending the University of Delaware where he will study psychology.  He will carry his Benedict’s experience with him.

“Benedict’s has given me a plethora of opportunities and has comforted me with a brotherhood and culture that no other high school in the world would have,” Ibrahim said. Many of the people that I’ve encountered through my years here are now family and will be my lifelong brothers.”