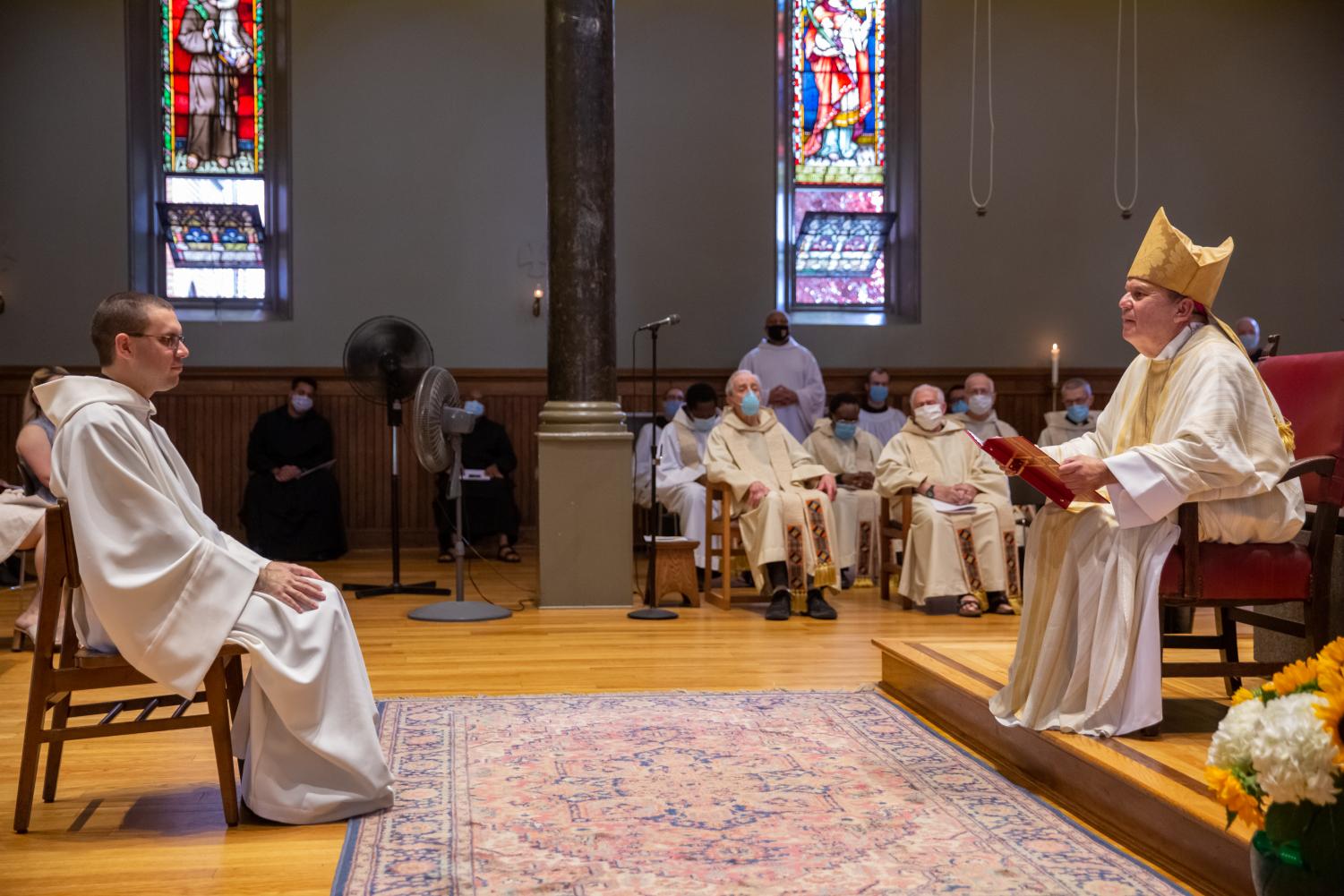 Benedictine monk and SBP Teacher Br. Asiel Rodriguez, O.S.B., was ordained a deacon on Sat., July 11, by the Most Rev. Bishop Manuel Cruz.

A Step Closer to Priesthood 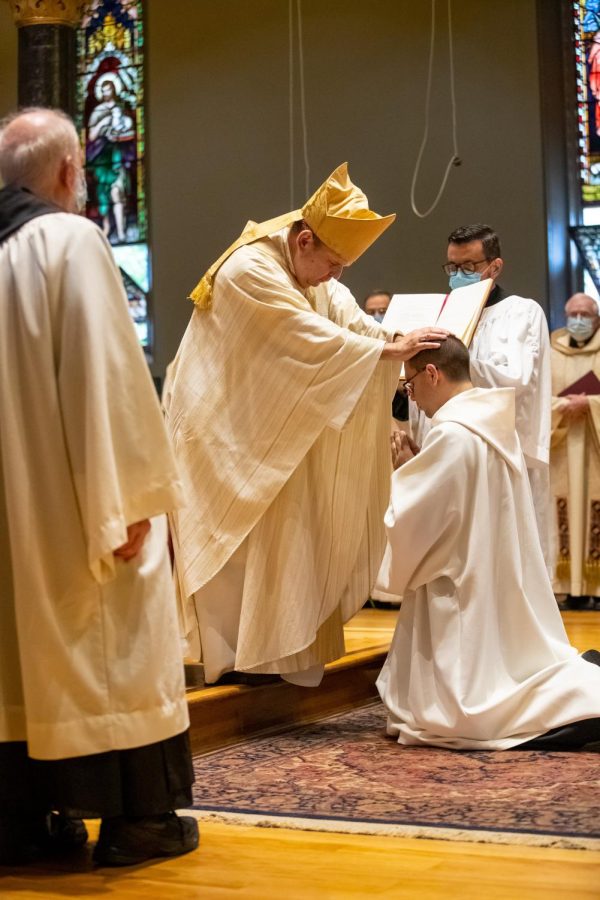 Pursuing his lifelong quest to become a Catholic priest, Br. Asiel Rodriguez was ordained a deacon on Saturday by Bishop Manuel Cruz.

With songs, prayer, and sacred ritual, the Ordination to the Diaconate of the Hive’s very own Br. Asiel Rodriguez, O.S.B, was completed on Sat., July 11, at the Abbey Church of St. Mary in Newark. The event, an important step on the path to Br. Asiel’s lifelong goal of becoming a priest, occurred on the Feast of St. Benedict, which also happens to be Br. Asiel’s birthday.

The Ordination, the culmination of a decade of study for the Benedictine monk, had been pushed back for months due to the coronavirus pandemic. Monastery leaders seized the opportunity created by new guidelines from the Archdiocese of Newark — allowing groups of up to 50 back into churches — to hold the event. While the Ordination was live streamed for the larger St. Benedict’s community, the present rules allowed Br. Asiel to invite as witnesses his extended Cuban-American family, many of whom live in nearby Union City. As a sign of the times, all attending wore face masks and sat on chairs appropriately set apart, abiding social distancing standards.

The sacred Catholic ritual included a full Mass presided over by the Most Rev. Manuel A. Cruz, Auxiliary Bishop of the Archdiocese of Newark. Newark Abbey monks conducted the readings, and Science Department Chair Dr. Dennis Lansang played the organ and sang. The Rite of Ordination occurred within the body of the Mass.

In his homily, Bishop Cruz spoke of a time he visited a Benedictine abbey on the West Coast and was deeply affected by a statue of St. Benedict on the property. It depicted the saint buffeted by wind during a storm but clinging for all his life to one thing: the book he authored known as “The Rule.”

“Yes,” Bishop Cruz said. “His rule for monastic life. Listen very carefully, my son, to the master’s instructions. And attend to them with the ear of your heart.” Referring to their common heritage as Cuban refugees, the bishop also honored Br. Asiel and his family by making part of his address in Spanish.

During the service, Abbot Melvin Valvano spoke of Br. Asiel’s lengthy preparations and worthiness for the role. Bishop Cruz then turned and assessed Br. Asiel directly. Br. Asiel responded by promising to observe the obligations of the office. While Dr. Lansang sang a lengthy hymn, the “Litany of Saints,” Br. Asiel prostrated himself on a carpet before the altar while the Bishop kneeled next to him. In doing so, Br. Asiel explained later, he was dying to his previous life and giving himself over to God. At the hymn’s conclusion, Bishop Cruz rose, stepped back on the altar and stood before Br. Asiel, who stood, then kneeled. The Bishop placed his hands on Br. Asiel’s head and ordained him.

His brother monks helped Br. Asiel don the dalmatic, a long, loose, wide-sleeved garment that is the proper liturgical vestment of deacons. Br. Asiel also put on a white stole he was presented with, placing it over his left shoulder and tying it cross-wise at his right side, like a sash.

With the Rite of Ordination as a Catholic Deacon completed, Br. Asiel was able to perform some of his new roles in Mass, including the distribution of Communion. According to the U.S. Conference of Catholic Bishops website, a deacon is “an ordained minister of the Catholic Church…Deacons are ordained as a sacramental sign to the Church and to the world of Christ, who came to serve and not be served.”

Concluding the service, Br. Asiel gave a speech acknowledging all those who have helped him along his journey. “After many years of preparation,” he said, “I stand before you as one who serves only by the grace of God and the prayers of so many of you. Please keep those prayers coming.”

After the service, Sister Ann Marie Gass, Dean of the Elementary Division at SBP, commented on Br. Asiel’s values pertaining to his future in the Church: “His hospitable and humble personality capture the essence of what it means to be a Benedictine monk and serve as a deacon in the life of the Church,” she said.

As a minister of the Word, Br. Asiel as a deacon will be able to proclaim the Gospel, preach, and teach in the name of the Church. As a minister of Sacrament, he can baptize, lead the faithful in prayer, witness marriages, and conduct wake and funeral services.

Br. Asiel will be regarded as a “transitional” deacon because he is on a path to the priesthood. But there are more than 13,000 deacons in the U.S. alone who minister in this Order permanently, according to the U.S. Conference of Bishops.

It’s already been an exciting year for Br. Asiel. He, along with fellow monk Br. Simon Peter Clayton, O.S.B., professed solemn vows to the Newark Abbey monastery in mid-March during the height of the pandemic in New Jersey. Through their vow of stability, they have committed themselves to the monastery for life. Br. Simon is also preparing for the priesthood.

With the Ordination concluded, Br. Asiel’s first order of business was to deliver his first homily at 7:30 a.m. Sunday Mass July 12 at St. Mary’s. After, he will focus on the next step of completing his preparation for his priestly Ordination.

“There has always been this huge desire in my heart to be a priest, since I was little,” Br. Asiel said. “Priests were huge examples for me, examples of a life of giving to others and with no time limits, completely giving their 24/7 as a gift to others.”

Br. Asiel looks forward to the day of his ordination to priesthood in order to serve at his full potential. He is excited about reaching out to more people, returning to his hometown parish in Union City, and using his ability of speaking English, Spanish, and Portuguese to possibly conduct Mass in different languages.

Br. Asiel’s priestly Ordination is now scheduled for November. For now, Br. Asiel will continue to practice using his extensive years of study as well as his teaching experience to help with the homilies he will be giving. Teaching at St. Benedict’s has given him invaluable experience in learning how to communicate the Word of God, he said.

In fact, he quipped, preaching might be a tad more straightforward.

“Right,” he said. “It’s a lot easier, and hopefully people in church won’t be as annoying, interrupting you know, like every two minutes.”

Reflection: Finding God in the Silence of the City 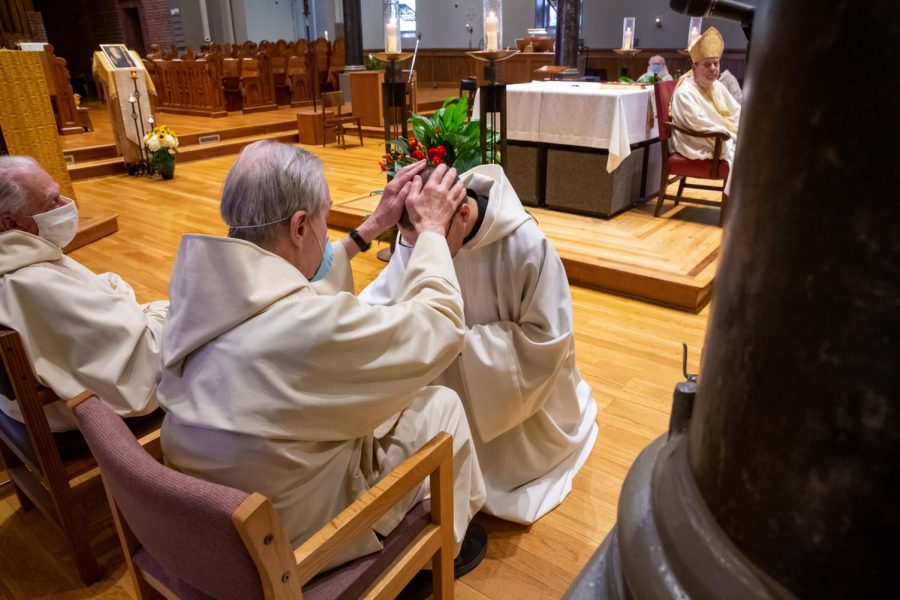 A warm summer breeze wafts through the tilted bottom half of the 19th century German stained glass windows. The saints of yesteryear depicted on the upper half look over the congregation.

The air intermingles with the faint echo of a Lil Uzi Vert song blasting outside the monastery walls. The church bells are chiming, adding a nuance of texture to this sensory celebration.

A bishop kneels before an abbot, kissing his stole, requesting his fatherly blessing to perform a marriage not quite like others. God is calling Br. Asiel Rodriguez, O.S.B., to be united to Him fully—to become a deacon, and soon, to carry out His priestly ministry on earth.

“The prologue of the Rule of St. Benedict tells us to listen to God with the ears of our heart,” Bishop Cruz reminded us, “and to enter into deeper intimacy with His heart. But this call can only be heard in the silence. God speaks to us in the silence.”

Isn’t that hard to do in an urban monastery, where the noise of music and sirens, students laughing and yelling, infiltrate those moments of prayer interspersed throughout the monks’ day?

Alas, the adherents of Christianity are faced with a God of paradoxes, a God who enters the messiness of the flesh and of human affairs, who speaks in the silence but also in the noise of the daily happenings of the city and the school.

We serve a God who throughout the years has espoused men—”beggars,” as Bishop Cruz said, to Himself as monks.  From St. Benedict, St. John of the Cross, and St. Bernard of Clairvaux, to men of today like Br. Asiel. A fellow refugee from Cuba, the bishop pointed out that Br. Asiel’s story reminds us that “we are all refugees, we are all seeking refuge in the heart of the Father, whose love for us never falters or runs out.”

So whether in the silence of the hills on the outskirts of Rome, or in the symphony of noises on a hill in an urban city, our paradoxical God is full of surprises. He surprised our community with a new spring of monastic vocations, and continues to surprise us everyday through the continued fidelity of the elder monks to their supernatural calling.

In the words of St. John of the Cross, may Br. Asiel’s “thirsty soul find the Bridegroom, in whose hands he will find drink to quench his thirst.” May this “wedding feast”—sedated as it may be by the circumstances brought on by the pandemic—bring forth a lifetime of surprises for him and the rest of the community.