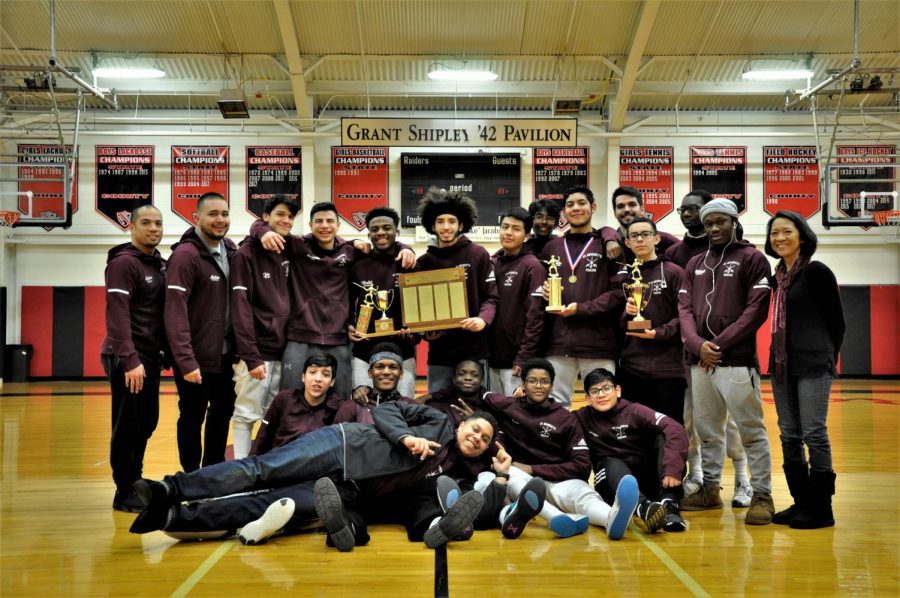 The fencing team, at last, capped its season, with a first place finish at State Preps.

Sweat rolls down their faces and drips onto the gleaming gym floor beneath them. They are tired and want to take a break. But they can’t. They must continue to fight. Their first couple of bouts have been rough, and they must recover. The championship trophy sits at a table not too far from them. They can’t let it stay there.

This was the reality the St. Benedict’s Prep Fencing Team faced as it competed in the annual State Prep Tournament at the Hun School in Princeton, N.J. The slow start seemed to dominate the team for a while, but it recovered, and, in the end, that recovery earned it a first place finish, as of Feb. 13.

Having competed at this tournament, the fencing team, at last, concludes its season, with a roaring 13-1 record, and a great fight at both the Cetrulo Tournament and now the State Prep Tournament.

“No (fencing) team is as complete as ours,” said Foil Coach Elliot McFarland ‘12. “That’s because we’re actually a team.” He continued, noting that the other teams “are not really invested in winning it all out the way we are. We’re worried about doing the best that we can individually, but also making sure that guys above and below us are doing their best.”

The seniors who, in their four years of fencing have come a long way, will be missed.

“You seniors—we’re going to miss you like crazy next year,” said Epee Coach Rich Molina ’06. “You’re the first class that we trained all four years.”

Coaches McFarland, Molina, and Mitchell began to coach four years ago, when the current seniors were freshmen.

The team’s captains were also proud of their team and gave words of encouragement on the way home.

“I’m really proud of you guys,” said Captain Marc Urquilla ‘19. “Whoever is taking starter spots next year, you’ve got big shoes to fill.”

Marc took first place for Epee in the individual section of the tournament, after a long final bout against his contender from the Lawrenceville School.

“I couldn’t be any happier right now,” said Captain Francisco Perez ‘19. “I love all you guys, and I really appreciate you,” he continued, the team awing at his comment.

His advice seems to have worked.

With this victory, the team looks onward with hope.

What remains is for the younger fencers to practice diligently, as much as they can, to fill in “the big shoes.” And they will have the new Cetrulo Family Fencing Center for practice, during the off-season time, unlike this year’s team, which was not able to use it til mid-season, when it opened.

Indeed, the team must take advantage of the state-of-the-art quarters, generously donated by Mr. Larry Cetrulo.

As legendary coach Derick Hoff H’96, who led the team in its early years to win several first place titles, advised the team at the room’s opening ceremony, everything will “go down the drain” if it doesn’t take advantage of the room.

The selection of new captains, who will take the shoes handed down by the now former captains, will occur sometime within the next month.

Something to look out for, in the coming year, is the Foil squad, which is on the rise, and next year may be, according to coach Mitchell, “that team.”

With the 2018-2019 season complete, all wonder with excitement what the next season will bring.

“It’s over for us seniors, but it’s not over for the younger guys,” said captain Urquilla, with hope, relief, and certainty in his eyes. “They have a lot to accomplish next year, but I know they can do it.”